Conservatives, If You Are Going to Talk to the Black Community, You Need to Have Something Truly Conservative to Say 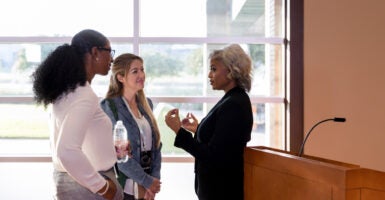 If conservatives really believe that conservatism is good for blacks, when will they take their message to the marketplace of ideas within the black community? (Photo: SDI Productions/Getty Images)

Grandma used to say, “Boy, your actions speak so loud I can’t hear a damn thing you are saying!”

This sums up perfectly the Republican Party and conservative’s relationship with the black community.

Republicans have a great story to tell relative to the black community, but their actions drown out the message.

Show me a press conference with conservatives and credible blacks that didn’t involve abortion or social welfare programs or race?

Where are the press conferences with conservatives and credible black entrepreneurs and heads of state from other countries or corporate executives from Fortune 500 companies?

Conservatives must be what they are looking for. If they truly believe in the Rev. Dr. Martin Luther King’s color of skin, content of character mantra, how is it that somehow you only see blacks when it’s concerning something negative in the black community?

We need some semblance of balance between “colorblind” and being blind to people who are black.

Radical liberal columnist Juan Williams tried to explain blacks voting for Trump this way, “It’s sad to say, but a lot of black and Latino voters, especially the men got distracted by Trump’s boasts and bling [about how much he had done for both groups].”

Blacks are sick and tired of radical elite liberals calling them stupid, but when will Republicans tap into this sentiment?  Far be it for blacks to vote in their own self-interest; they are not smart enough to do that according to liberals.

These issues are all within the party’s sweet spot, but conservatives have not made a priority of forming a coalition with blacks on key issues that both agree on.

I am a graduate of Oral Roberts University in Tulsa, Oklahoma. Roberts would always tell me, “Go into everyman’s world and meet them at the point of their need.” I have never forgotten this, and it has served me well in every facet of my life.

If conservatives really believe that conservatism is good for blacks, when will they take their message to the marketplace of ideas within the black community? If they truly believed in it, they would be shouting the virtues of conservatism from every mountain top and from and to every village.

They would be working hand-in-hand with credible blacks both publicly and privately. No more blacks who are buffoons, who have no connection to the black community, or who have no institutional knowledge of blacks who came before them in the party.

If you don’t know all or most of these individuals, then you are part of the problem. You can search the internet for them if you so desire.

We are about to enter what I call the “black season” in America: the Rev. Dr. Martin Luther King Jr.’s birthday holiday on Jan. 17 and Black History Month. During this time, conservatives will do a few menial, perfunctory things, and as usual, they will do it the wrong way.

How many members of Congress or Republican governors have “credible” blacks to help them write a speech in celebration of King’s holiday? How many of these conservatives have anything of substance to say if they do decide to give a speech? My experience tells me almost none of them!

A couple of years ago, I was asked by the head of the party to write a King Day speech for the chairman.  Their white staff watered it down so much that my speech became unrecognizable. When it was not well received by the black community, the chairman complained.

I showed the chairman my speech compared to the one given and I simply laughed in front of the whole staff. The chairman saw both speeches and chose the watered-down version. The chairman later apologized.

Any black talking about going to barber shops should have their black card permanently revoked and sentenced to political hell.

Any party or elected official who stands before a black audience and mentions Abraham Lincoln, individual freedom, lower taxes, or equality should continue to be ignored.

Blacks want to know how your version of conservatism is in their best interests.

Until you can answer that, black folks prefer for you to simply stop talking until you have something to say.