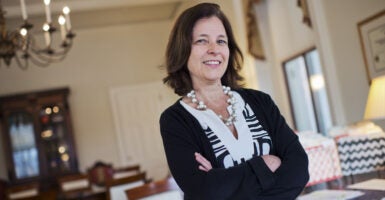 Sarah Bloom Raskin—seen here in her then-Treasury Department post on Feb. 26, 2015—has been nominated by the president for a high-ranking position with the Federal Reserve Board. (Photo: Tom Williams/CQ Roll Call/Getty)

President Joe Biden’s choice for the No. 2 post at the Federal Reserve Board has advocated for the central bank to use its “powerful role” to discourage investment in oil, gas, and coal companies and to try to boost alternative energy sources amid the “climate crisis.”

On Friday, Biden announced the nomination of Sarah Bloom Raskin to be the vice chairman for supervision of the Federal Reserve Board of Governors.

Biden called Raskin, a former member of the board and a former deputy secretary of the Treasury Department during the Obama administration, “among the most qualified nominees ever for the position.”

She also previously served as the Maryland state commissioner of financial regulation from 2007 to 2010 under then-Maryland Gov. Martin O’Malley, a Democrat.

Her husband is Rep. Jamie Raskin, D-Md., one of the more liberal members of Congress. He gained national notoriety for leading the House impeachment managers prosecution team in the 2021 second Senate impeachment trial of former President Donald Trump. The congressman is also a member of the House select committee investigating the Jan. 6, 2021, Capitol riot.

The appointment of Sarah Bloom Raskin comes after Biden disappointed some on the left-wing of his party for appointing Federal Reserve Chairman Jerome Powell to a second four-year term.

Biden’s pick for vice chairman previously wrote in a May 28, 2020, op-ed in The New York Times: “The Fed is ignoring clear warning signs about the economic repercussions of the impending climate crisis by taking action that will lead to increases in greenhouse gas emissions at a time when even in the short term, fossil fuels are a terrible investment.”

“The decision to bring oil and gas into the Fed’s investment portfolio not only misdirects limited recovery resources, but also sends a false price signal to investors about where capital needs to be allocated,” Raskin continued in the op-ed.

It increases the likelihood that investors will be stuck with stranded oil and gas assets that society no longer needs. It also forestalls the inevitable decline of an industry that can no longer sustain itself.

And finally, it undermines urgent efforts to counter surging carbon dioxide and methane emissions, which are bringing us closer to the catastrophe of an unlivably hot planet.

The Federal Reserve’s role is monetary policy, but as The Daily Signal has previously reported, some of the individual banks have pushed a social and political agenda.

Raskin went on to add the Federal Reserve had a “unique” role in addressing climate change.

“The Fed’s unique independence affords it a powerful role, and its mandate includes ensuring both the stability of the financial system and full employment. Climate change threatens financial stability; addressing it can create economic opportunity and more jobs,” the Raskin op-ed says.

“Sarah Bloom Raskin has specifically called for the Fed to pressure banks to choke off credit to traditional energy companies and to exclude those employers from any Fed emergency lending facilities,” Toomey said in a statement.

I have serious concerns that she would abuse the Fed’s narrow statutory mandates on monetary policy and banking supervision to have the central bank actively engaged in capital allocation.

Such actions not only threaten both the Fed’s independence and effectiveness, but would also weaken economic growth.

After stints at the Fed and the Treasury Department, Raskin is now a professor at the Duke University School of Law and serves as on the board of trustees of Amherst College.

On Friday, Biden also nominated Lisa Cook, an economics and international relations professor at Michigan State University, and Philip Jefferson, a vice president at Davidson College, to serve on the board.

“We are at a moment of historic economic progress alongside unique economic challenges as we work to drive our recovery forward. This is a moment that calls for sound, independent leadership from the Board of Governors at the Federal Reserve,” Biden said in a statement about the three nominees.

He later added, “Raskin is among the most qualified nominees ever for the position of vice chair for supervision, while Jefferson and Cook are talented economists with decades of experience working on a broad range of economic issues.”