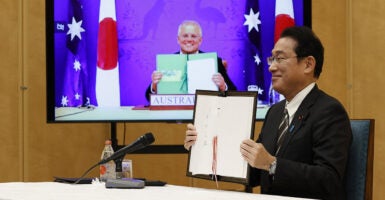 As Communist China increases hostilities in the Indo-Pacific region, Japan is stepping up, not only with bold statements against China’s intimidation but with action—including military contingency planning with the U.S. and joint defense agreements with regional allies.

Foreign policy successes aren’t always flashy. But several recent accomplishments in the Indo-Pacific region are collectively affirming a more enhanced allied deterrence against Chinese intimidation of Taiwan, Japan’s growing security role outside of its alliance with Washington, and U.S. commitment to the defense of the region.

The first success saw Washington and Tokyo developing combined contingency plans for responding to a Taiwan crisis with communist China. The allied military planning was necessitated by China’s increasing threats toward Taiwan. While the United States has long had a role in Taiwan defense contingencies, the prospects of Japan’s involvement in them have long been complicated by the legal intricacies of its post-World War II passivism.

During the past year, however, Tokyo has issued increasingly bold statements of support for Taiwan against Chinese intimidation, even hinting at military support if Beijing attacked Taiwan.

Last year, Defense Minister Nobuo Kishi declared that the security of Taiwan was directly linked to that of Japan. Deputy Prime Minister Taro Aso asserted that a Chinese invasion of Taiwan would be an “existential threat (to Japan) since Okinawa could be next” and would necessitate a joint Japanese-U.S. response to defend the island.

Tokyo has been studying possible military responses to a conflict over Taiwan, including protecting U.S. warships and military planes coming to Taiwan’s defense. In 2021, Washington and Tokyo drafted a combined operation plan, including establishing a U.S. Marine Corps attack base on Japan’s southwest islands if a Taiwan attack appeared imminent. Japanese Self-Defense Forces would provide unidentified support to the operation.

The second recent success saw Japan and Australia signing a Reciprocal Access Agreement this month to enhance defense cooperation and the interoperability of their military forces. The agreement will allow more efficient coordination during combined military training exercises as well as disaster response operations.

In recent years, Japan has steadily increased military cooperation with Australia and other regional partners, stepping up its regional security role to address common threats in the Indo-Pacific. In November 2021, Japanese naval forces conducted a protection mission of Australian ships, the first time they ever conducted a mission with a country other than the U.S.

Japanese forces had been precluded from protecting other nations’ forces until 2015 legislation allowed for collective self-defense. Having set the precedent for expanding its security protection beyond its U.S. alliance partner, Japan is now considering similar exercises with the United Kingdom, France, and Canada, and possibly Germany and India.

Finally, for the third foreign policy accomplishment worth noting, this month, the United States and Japan will sign an updated Special Measures Agreement outlining Tokyo’s contribution to offsetting the cost of stationing U.S. forces in Japan. These periodic negotiations are always difficult, since they involve money, but are typically mundane and handled by working-level diplomats. During the past few years, however, these negotiations were more contentious, as they focused more on the payments than the purposes of the alliance themselves.

The forthcoming U.S.-Japan agreement marked a return to the former, traditional approach to negotiations. Putting our disagreements behind us and turning the page on the agreement enables Washington and Tokyo to now focus on addressing common threats rather than the internal mechanics of the alliance.

Under long-serving Prime Minister Shinzo Abe, Japan strengthened its alliance with the United States, undertook an increasingly firm security stance against Chinese and North Korean threats, and set the intellectual foundations for the successful and ongoing Free and Open Indo-Pacific strategy and the Quadrilateral Security Dialogue amongst Japan, the United States, Australia, and India.

Current Prime Minister Fumio Kishida has expressed concerns about China’s growing military strength and called Taiwan “the front line in the struggle by democracies to resist authoritarianism’s advance.” This latest series of seemingly minor policy wins will help the U.S. make the most out of Tokyo’s new-found clarity.