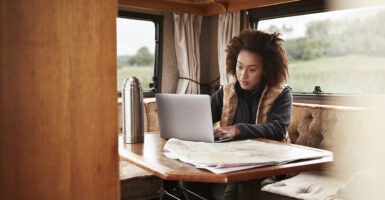 Independent workers are significantly happier with their jobs and work-life balance, with about half of independent workers saying that no amount of money would cause them to switch from freelancing to traditional employment. (Photo: Klaus Vedfelt/Getty Images)

According to a study by Upwork, 59 million Americans, or 1 in 3 workers, performed independent work in 2021. And 9 out of 10 of them believe that “the best days are ahead” for freelancing.

(Freelancing, independent work, contracting, gig work, and self-employment all describe work that individuals perform independently instead of for a traditional employer).

But that could all change if the Senate decides to confirm David Weil to run the Department of Labor’s Wage and Hour Division.

Weil’s track record in that same position under the Obama administration, and his statements and efforts to attack independent workers, would not only dampen their bright outlooks, but could put their entire livelihoods and ways of living on the line.

Another factor contributing to the rise in independent work is that the be-your-own boss model opens doors to work for people who otherwise couldn’t work. In 2021, 55% of independent workers said they were not able to work for a traditional employer because of personal circumstances such as their health or child care needs.

Independent workers are also significantly happier with their jobs and work-life balance, with about half of independent workers saying that no amount of money would cause them to switch from freelancing to traditional employment.

Many businesses—especially smaller ones—rely heavily on independent contractors to grow and compete with bigger companies. Employers with four or fewer employees use seven contractors, on average, to run their businesses.

Yet, the policies advocated by Weil deny that working for oneself could be better than working for a traditional employer and having one’s workplace conditions, compensation, and hours universally set by a labor union.

One of the Biden administration’s and Weil’s primary goals it to implement the PRO Act—a Big Labor wish list that includes upending independent contracting.

But that’s just the start. Among other things, the PRO Act would also: take away workers’ privacy and their right to a secret-ballot election; upend the labor market by overturning the franchise business model; invalidate 27 states’ right-to-work laws; and legalize secondary boycotts (subjecting neutral businesses to union-led strikes, boycotts, and harassment).

With most of the PRO Act’s radical agenda not possible through regular order nor through the reconciliation process, a Wall Street Journal commentary noted, “The White House will deputize the Labor Department to implement as much of it as possible through regulatory fiat. Weil would be a chief enforcer, and history shows he won’t be shy.”

Weil’s tenure over the Labor Department’s Wage and Hour Division under the Obama administration included regulatory measures that made it harder for people to work for themselves and harder for businesses—especially smaller ones—to grow and thrive.

The Trump administration undid that damage—rightly determining legal liability based on whether a company has direct and immediate control of a worker. But now, the success and survival of thousands of franchise brands—including about 730,000 individual franchise operations and 8.4 million workers—could be on the line, including 39% of female franchise owners who say they would not have been able to own their business without the franchise model.

And Weil has proven his audacity to ignore statutory limits of administrative authority. If confirmed, Weil will likely attempt to revive his previous overtime exemption rule that was determined “unlawful” by a federal court in 2016. The judge in that decision—Obama-appointee Judge Amos L. Mazzant III—said, “the department exceeds its delegated authority and ignores Congress’ intent.”

The labor market is incredibly strong right now and a silver lining of the COVID-19 pandemic has been increased flexibility, autonomy, and more family-friendly workplace policies. Most workers don’t want to step back two years in time, less yet more than half-a-century to the one-size-fits-all industrial-era union model Weil wants to impose.

Moreover, with agencies like the Occupational Safety and Health Administration already overstepping their statutory authority through vaccine and testing mandates on private employers, Congress shouldn’t arm the Department of Labor with someone who has proven his penchant for overstepping authority.