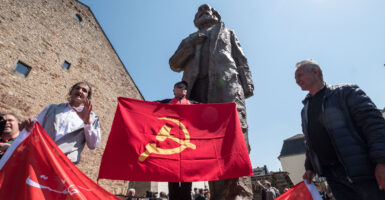 A visitor from Bolivia hoists a communist flag in front of a sculpture of German revolutionary Karl Marx in Trier, Germany, on May 5, 2018, the 200th anniversary of Marx's birth there. The sculpture was a "gift" from Communist China. (Photo: Thomas Lohnes/Getty Images)

Radical progressives are trying to persuade Americans, especially young Americans, that socialism is the solution to America’s socioeconomic problems. They are banking on millennial ignorance of the repeated failures of socialism and the proven ability of free enterprise to produce opportunity and prosperity for the greatest number.

To camouflage their intent, progressives speak of “democratic” socialism. They promise a tranquil land of collective ownership and equal distribution. But in every case, for more than a century, the socialist “paradise” has turned out to be a centralized state administered by political elites.

For a realistic understanding of socialism, educators must first dismantle the most egregious myths about this pernicious system.

Myth 1: Karl Marx, the founder of socialism, was one of the great thinkers of the 19th century.

In truth, Marx was wrong about nearly everything. Nearly 200 years after “The Communist Manifesto” was published, the nation state has not withered away, and capitalism rules most of the global economy.

Workers have preferred to turn into entrepreneurs rather than revolutionaries, to their great benefit. Private property is a cornerstone of every prosperous country (including the Nordic countries). As the respected economist Paul Samuelson has written: Marx’s “scientific socialism” is “colossally useless.”

Myth 2: Socialism places power in the hands of the people.

In truth, socialism cedes power to the government and the political elites who run it. After more than 60 years, the Cuban people are still waiting for the free and open elections that Fidel Castro promised.

According to a leading Latino economist, Venezuela’s economic catastrophe—brought on by its experiment in socialism—”dwarfs” any in U.S., European, or Latin American history. Socialism has so devastated this once prosperous country that, today, 90% of Venezuelans live in poverty.

Myth 3: Socialism is working in Denmark and the other Scandinavian countries.

In truth, Denmark has a free market economy—and it is capitalism that enables the Danish government to finance a bountiful welfare state through top-to-bottom personal income and value-added taxes.

A frustrated Danish prime minister told a shocked Washington audience, “I would like to make one thing clear … Denmark is a market economy.” Denmark (along with the other Nordic countries) has relatively few business regulations and no minimum wage, leading one economist to say, “Denmark is probably more capitalist than the United States.”

Myth 4: Socialism has never failed, because it has never been truly tried.

In fact, socialism has failed everywhere it has been attempted for over a century, from the Bolshevik Revolution of 1917 to present-day Chavez-Maduro socialism in Venezuela. Nowhere has democratic socialism been more faithfully practiced and then rejected by public demand than in Israel, India, and the United Kingdom following the end of World War II.

Israel’s first settlers sought to create an economy in which market forces were controlled for the benefit of all. Socialism worked until Israel suffered its first major recession despite extensive government controls. The government reversed course and adopted a market economy.

A high-tech revolution swept the country, transforming Israel into a major global player in technology.

Following independence in 1948, India adhered strictly to a socialist ideology. But wars, drought, and the oil price crisis of 1973 shook the country. Half of the population lived in poverty. The government abandoned socialism, and India’s middle class expanded enormously, becoming the largest in the free world.

Never before in recorded history, wrote an Indian journalist, have so many people risen so quickly.

After three decades of socialism, the United Kingdom experienced a socioeconomic revolution in the 1980s with the election of Conservative Prime Minister Margaret Thatcher.

Whether it was a small Middle Eastern country, a large agricultural country with a population of 1.3 billion, or the nation that sparked the Industrial Revolution, capitalism topped socialism every time.

This is the true story of socialism, a pseudo-religion posing as a pseudo-science and run by political elites. It could only be adopted in America if we repudiated every principle of the founding, did away with federalism, regulated the 33 million small businesses that produce nearly half the jobs in America, and heavily taxed everyone, not just the top 1%, to pay for the government needed to run the lives of 330 million Americans from the cradle to the grave.

Millennials do have a choice: the suffocating embrace of socialism, under which individual freedom and responsibility are surrendered, or the freedom of democratic capitalism, under which people of all colors and classes can work to be whatever they want to be.

This article first appeared at FoxNews.com.