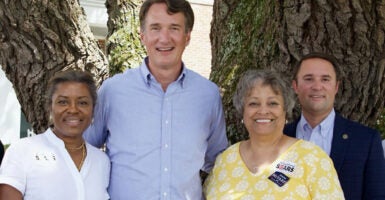 Virginia Gov.-elect Glenn Youngkin has named former Heritage Foundation President Kay C. James to be the next secretary of the commonwealth.

“Secretary James will be a true asset to the administration,” Youngkin said in a Friday press release announcing James’ appointment. “Our shared vision, combined with her tremendous experience, will pave the way for a new day in Virginia.”

As secretary, James will assist the governor in a number of capacities and maintain official state records.

James, 72, has spent much of her career fighting for conservative values and is no stranger to the field of public policy.

“As a lifelong Virginian who has devoted much of my career to public service, I see serving as secretary as one more opportunity to give back to the commonwealth that has given so much to me,” she said.

James’ career in public service began as a school board member in Fairfax County, Virginia, and then as a member of the Virginia State Board of Education.

Service in the field of education has been a continual theme throughout James’ career.

She served as dean of the Robertson School of Government at Regent University in Virginia Beach, Virginia, from the mid-to-late ’90s. She later served on the Virginia Commonwealth University Board of Visitors from 2010 to 2014.

James’ background and passion for education at all levels will likely serve her well in the Youngkin administration.

Youngkin, who takes office on Jan. 15, has taken a strong stance on education issues, speaking throughout the 2021 off-year campaign about the need for parents’ voices to be heard and for public schools to stop teaching critical race theory.

“We’re going to embrace our parents, not ignore them,” Youngkin said during his victory speech after his election on Nov. 3. Some attribute Youngkin’s victory over Democrat Terry McAuliffe, a former governor seeking to return to office, to his focus on education issues at a time in Virginia when far-left ideology is being embraced by some school districts, such as in Loudoun County.

In addition to James’ experience in the field of education, she also served on the National Commission on Children under Presidents Ronald Reagan and George H.W. Bush. Under Bush, she also served as associate director of the White House Office of National Drug Control Policy and assistant secretary for public affairs at the U.S. Department of Health and Human Services.

She long has been a fierce pro-life advocate, working in the 1980s as the chief spokeswoman for the National Right to Life Committee. James is also the founder of the Gloucester Institute, an organization helping to train African American college students to be the next generation of leaders.

As a young child, James was raised in the housing projects of Richmond. She later was one of the first black children to take part in the desegregation of schools in Virginia. James is a graduate of Hampton University, a traditionally black college in Hampton, Virginia.

James has been serving as co-chairman of Youngkin’s gubernatorial transition team since stepping down as Heritage president in December. She will officially step into the role of secretary of the commonwealth when Youngkin is sworn in on Saturday.