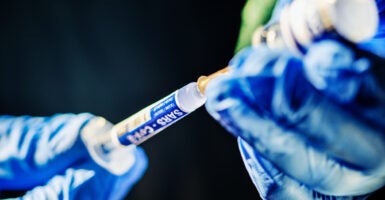 The Supreme Court heard oral arguments Friday in two cases on an emergency basis. Both cases involve lawsuits stemming from the Biden administration’s attempt to expand vaccination of Americans in light of the ongoing COVID-19 pandemic and COVID-19’s seemingly limitless variants.

The first case, NFIB v. OSHA, arose from challenges filed by employers (including The Heritage Foundation) and states against the Occupational Safety and Health Administration’s vaccine-or-test mandate (known as an emergency temporary standard, an emergency rule applying to employers with 100 employees or more). (The Daily Signal is the news outlet of The Heritage Foundation.)

In that case, the plaintiffs argued that the Occupational Safety and Health Act of 1970 did not clearly authorize OSHA to commandeer businesses into implementing a vaccine-or-testing mandate covering perhaps 84-plus million Americans.

The plaintiffs also argued that OSHA was required to use regular notice-and-comment procedures required by the Administrative Procedure Act (a way to ensure thoughtful and public rule-making by executive agencies), instead of issuing an emergency rule.

The states argued that the Centers for Medicare and Medicaid Services lacked the authority to condition a facility’s participation in those programs on compliance with a vaccination mandate for all health care personnel. The states also maintained that, by statute, the federal government cannot manage personnel decisions at medical facilities, but the mandate would impermissibly have that effect.

Three justices—Stephen Breyer, Sonia Sotomayor, and Elena Kagan—focused on factual aspects of the cases, rather than the law.

Among other things, the justices emphasized that SARS-CoV-2 poses serious health risks to whomever it infects; that hundreds of thousands of people have been infected just since Jan. 1; that the disease it causes, COVID-19, is potentially fatal to some individuals; and that the issue itself is a simple one, to wit: whether the government’s program should be allowed to go forward during the pendency of the litigation.

To the last point, those justices repeatedly questioned counsel about the harm that the public would suffer if the mandates were delayed “even for a second,” as Breyer said. In fact, most of the oral argument in the OSHA and Centers for Medicare and Medicaid Services cases was devoted to a discussion of the facts rather than to the law.

This is significant because no provision in the Occupational Safety and Health Act or the Medicare and Medicaid programs’ statutes authorizes OSHA or the Centers for Medicare and Medicaid Services to make medical decisions for employees by coercing them to be vaccinated, despite how dire such facts may potentially be.

In fact, no act of Congress expressly authorizes any federal agency to demand that anyone be vaccinated against any disease.

Some of the justices, including Justice Brett Kavanaugh, made this important legal point, but it might have been lost among the torrent of worst-case hypotheticals offered by Breyer, Sotomayor, and Kagan.

In the OSHA mandate argument, Chief Justice John Roberts made clear that the federal mandates have been referred to as a “workaround,” a reference echoed by Justice Neil Gorsuch. He went on to ask the government’s attorney, U.S. Solicitor General Elizabeth Prelogar, “What are you trying to work around?”

Justice Amy Coney Barrett asked when exactly does the authority to issue such an “emergency” regulation (and the pandemic that supports it) end? The absence of a self-limiting principle seemed to be problematic for all the conservative justices.

When it last asked the Supreme Court to approve an expansive interpretation of a federal agency’s authority, the Biden Administration had a rough go of it. Last August, the Supreme Court determined in Alabama Association of Realtors v. Department of Health and Human Services that the federal Centers for Disease Control and Prevention lacked authority to impose a nearly nationwide ban on the eviction for non-payment of rent of tenants from residential rental properties.

The Supreme Court made it clear that agencies have only the authority that Congress has given them via a duly-enacted statute and that the COVID-19 pandemic does not supply additional statutory power despite its dangerous and deadly consequences.

The Medicaid and Medicare health care facility mandate and the OSHA workplace mandate both stem from statutory language that has never been used to require vaccination. Today’s questioning from some justices seemed to indicate that under either law, the government lacks any authority to do so.

The court will likely issue an order in the two cases in the very near future either halting the vaccination mandate or allowing them to go forward, with opinions to follow. Whatever the outcome in today’s cases, their consequences promise to reverberate for some time.