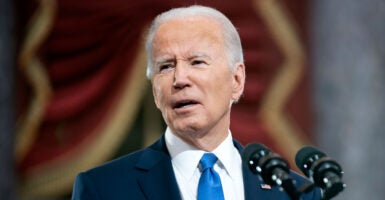 Judge Jeffrey Brown, of the U.S. District Court for the Southern District of Texas, ruled that he couldn’t determine the constitutionality of President Joe Biden’s action because TC Energy, the pipeline’s developer, had abandoned the project. On June 9, TC Energy announced its intention to permanently halt construction of the pipeline, saying it would focus on other projects.

Biden canceled the pipeline’s federal permit immediately after taking office on Jan. 20 in an executive order. The order said the U.S. “must prioritize the development of a clean energy economy” and that the Keystone project would undermine the nation’s role as a climate leader on the world stage.

“The court takes TC Energy at its word that Keystone XL is dead,” Brown wrote in the ruling on Thursday. “And because it is dead, any ruling this court makes on whether President Biden had the authority to revoke the permit would be advisory. Thus, the court has no jurisdiction and the case must be dismissed as moot.”

Brown declined to directly rule on whether it was within Biden’s constitutional authority to issue the order.

Led by Montana Attorney General Austin Knudsen and Texas Attorney General Ken Paxton, 23 states sued the Biden administration on March 17, arguing the power to regulate foreign and interstate commerce belongs to Congress. The lawsuit said Biden “must work with and abide by the limits set by Congress—whether he likes them or not.”

“Recent events have made it clear that we need more, not less, domestic energy supply,” Knudsen told the Daily Caller News Foundation in a statement Thursday. “The Keystone XL or a similar pipeline could have provided that. Instead, Montanans are once again paying the price for President Biden’s disastrous energy policies that pander to his coastal elite base without even a perceived environmental benefit.”

“It’s unfortunate that the important constitutional question in this case—if the president can revoke a congressionally approved cross-border permit—will go unanswered because TC Energy inserted itself into the court proceedings unprompted,” he continued. “This also deprived Montanans and residents of other states who would have benefited from the pipeline’s jobs and tax revenue of their day in court.”

“This Administration has sought to leverage its power regarding U.S. foreign policy to unilaterally contradict Congress’s stated domestic policy regarding one of the most significant energy projects in a generation: the Keystone XL Pipeline,” the lawsuit added.

The project, which was vigorously opposed by environmental groups, was a proposed extension of an already-existing pipeline that takes oil from western Canada to Texas. Part of the extension, which crosses the U.S.-Canada border into Montana, has already been completed, the lawsuit stated.

Overall, the pipeline was expected to generate $55.6 million in property taxes across three states. Keystone XL’s project labor agreement projected the creation of 42,000 American jobs and $2 billion in total wages.

Brown was nominated to the bench by former President Donald Trump.

Knudsen didn’t immediately respond to a request for comment from the Daily Caller News Foundation.