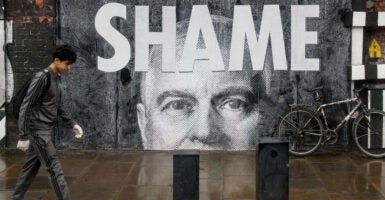 A pedestrian passes a mural of Prince Andrew, the duke of York, on July 1, 2020, in London. The prince has come under increased scrutiny over his relationship with now-deceased sex offender Jeffrey Epstein and Epstein's recently convicted associate, Ghislaine Maxwell. (Photo: Guy Smallman/Getty Images)

Many of those connected with convicted sex offender Jeffrey Epstein remain silent in the face of questions after the trial of a close associate, with some entities not even responding to inquiries from the Daily Caller News Foundation.

Ghislaine Maxwell, Epstein’s onetime girlfriend and associate, was convicted on five of six counts in December, including a charge of conspiring to sex-traffic minors. Epstein, who pled guilty to sex charges in 2008, was arrested in 2019 on sex-trafficking charges and committed suicide while awaiting trial.

The guards on duty at the time of his suicide were charged, but the charges were dropped during Maxwell’s trial.

Epstein had extensive ties to celebrities, politicians, and executives, even after he was a convicted sex offender. Among those who were known to have been close were L Brands founder Les Wexner, film director Woody Allen, and Prince Andrew.

Andrew is perhaps the most famous of Epstein’s friends, having met in 1999, according to a 2019 report by the New York Post. The Duke of York stepped back from royal duties in the wake of an interview with the BBC about his ties with Epstein.

Attorneys representing Andrew did not respond to requests for comment.

Epstein also had ties with Harvard University, to which he donated more than $9 million, according to an internal report issued by the university that showed Epstein made dozens of visits after his 2008 plea bargain. The university took action against Martin Nowak, a professor who provided Epstein with the access, placing limits on his research and advisory activities.

Harvard did not respond to an email requesting comment on the university’s ties with the disgraced financier from the Daily Caller News Foundation.

Microsoft co-founder Bill Gates also met with Epstein a number of times, as did employees of the Bill and Melinda Gates Foundation, according to The Wall Street Journal. Gates met with Epstein as late as 2019, despite concerns his then-wife, Melinda, expressed.

“I had several dinners with him, you know, hoping that what he said about getting billions of philanthropy for global health through contacts that he had might emerge,” Gates said in an interview with CNN host Anderson Cooper. “When it looked like that wasn’t a real thing, that relationship ended.”

The Gates Foundation did not respond to the Daily Caller News Foundation’s request for comment.

Prior to Epstein’s 2008 conviction on charges stemming from soliciting, his legal team included lawyers from Kirkland and Ellis, including former independent counsel Ken Starr and Jay Lefkowitz.

Lefkowitz did not respond to the Daily Caller News Foundation’s request for comment. Starr, who also was part of the legal team, told the foundation he was seeking to persuade the Justice Department to drop the charges.

“My role, as ‘of counsel’ to the law firm, was to seek to persuade the U.S. Attorney’s Office that the matter in question was entirely a state criminal matter, not a federal matter,” Starr said in an email.

“My law firm handled the representation in an entirely professional manner.  We sought to convince the U.S. Attorney that the offenses, as charged at that time, were properly entrusted to the Palm Beach County State’s Attorney’s Office for prosecution. Notwithstanding our arguments, the U.S. attorney was not persuaded,” Starr said.