Biden Wants to, in His Words, ‘Eviscerate the Senate’ 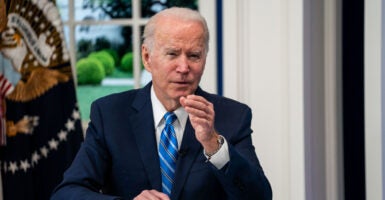 As a senator, Joe Biden once condemned weakening the Senate's tradition of extended debate. Now that his party is in power, he wants to eviscerate the Senate. (Photo: Kent Nishimura/Los Angeles Times/Getty Images)

Then-Sen. Joe Biden, D-Del., condemned weakening the Senate’s tradition of extended debate as “an example of the arrogance of power,” a “power grab by the majority party” that would “eviscerate the Senate.” It was 2005, and Republicans held the White House and Congress.

Today, with Biden himself in the White House and Democrats the majority in Congress, he is calling for the same power grab in order to pass an unconstitutional federal takeover of elections. The evisceration of the Senate, however, will not stop there.

Senate rules empower the minority party by requiring a supermajority to end debate before a simple majority can pass bills or confirm nominations. The Congressional Research Service describes extended debate as one of the Senate’s “most distinctive procedural features” that pushes the majority to work with the minority.

Majority Leader Chuck Schumer, D-N.Y., himself has explained how, by making the Senate “the preserve of minority rights,” the “hallowed process” of extended debate “often makes better legislation.”

Speaking of Schumer, he joined Biden in 2005 to defend extended debate, which he called the “hallmark of the Senate,” as “the guard rail of our democracy.” He denounced any attempt to undermine extended debate as a “power grab” that would destroy the “checks and balances that are at the core of our Constitution and our Republic.”

Schumer went even further, arguing that extended debate is especially important when “the Senate and the Presidency are in the hands of the same party” and when the Senate considers “controversial matters.”

In other words, extended debate is not about a particular bill or nomination, but about the Senate itself and its unique role in our system of government. Biden asserted that “[a]ltering Senate rules to help in one political fight or another … would be disastrous.”

Schumer also warned that weakening extended debate would be “a recipe for more conflict and bad blood between the parties” and that it “would turn the U.S. Senate into a legislative wasteland and turn the Constitution inside out.”

Then-Sen. Barack Obama, D-Ill., echoed this point, saying that if the majority “choose[s] to change the rules and put an end to democratic debate, then the fighting, the bitterness, and the gridlock will only get worse.”

The Senate, Schumer reminded his colleagues, has had this “very important function in this Republic” for more than 200 years. The Senate, in fact, has changed the vote threshold for ending debate on legislation only through the established, formal process for amending Senate rules and only by wide bipartisan consensus: 76-3 in 1917, 63-23 in 1949, and 72-22 in 1959.

You get the point. Each time, the Rules Committee held hearings on a resolution to change the debate rule before the full Senate debated and voted on it.

The current 60-vote threshold for ending debate today is the lowest since the turn of the 19th century, and the Senate has several times rejected weakening it further. In 1995, for example, Biden joined 75 bipartisan colleagues in rejecting such a proposal. In 2011, the Senate rejected a similar plan by an even more lopsided 12-84; the opposition included 20 current Senate Democrats, including Schumer and President Pro Tempore Patrick Leahy, D-Vt.

When the Senate turned down the same proposal two years later by a simple voice vote, none of the 36 current Democrat senators serving at the time objected. Just four years ago, 26 current Democrats joined 25 Republicans on a letter opposing “any effort to curtail the existing rights and prerogatives of Senators to engage in … extended as we consider legislation.” The signers also included then-Sen. Kamala Harris, D-Calif.

Just a few years ago, Schumer reminded his colleagues that the Senate “was intended as a forge for bipartisan consensus—a cooling saucer, as the Founding Fathers said.”

This analogy, which Schumer has used dozens of times over the years, refers to George Washington’s explanation of the Senate to Thomas Jefferson as cooling the political passions of the House in the same way that hot tea cools when poured into the saucer.

In February 2018, for example, Schumer said that “the Senate—what President Washington famously called the cooling saucer for our politics—that can show the Nation … what bipartisanship looks like, what compromise looks like.”

Bipartisanship is great—until it isn’t. Democrats today have the narrowest combined House and Senate majority in American history, and the party’s left wing is defining its agenda. From LGBTQ issues to the current attempt to seize control of state and local elections, Democrats are pushing a radical and, in some cases, unconstitutional agenda. For Biden and Schumer, consensus and compromise have become obstructions rather than objectives.

This is exactly the situation—narrow one-party control, extreme ideological agenda—in which the Senate’s unique role and its tradition of extended debate should be embraced. Instead, Democrats appear determined to do what Biden once said would “emasculate the Senate.”

Attempting to eliminate extended debate “to help in one political fight or another” is bad enough. Democrats, however, can do so only by using the “nuclear option,” which would leave the “three-fifths” language in Senate Rule 22 intact but reinterpreting it to mean “simple majority.”

Putting power ahead of principle is not inevitable. In May 2017, Then-President Donald Trump demanded that Senate Republicans abandon extended debate in order to enact his legislative priorities. Sen. Mitch McConnell, R-Ky., majority leader at the time, rejected “fundamentally changing how the Senate has worked for a very long time.”

Condemning the “power grab by the majority party” in May 2005, Biden observed that there had been attempts to undermine extended debate “in the heat of majority excess.” But never, he said, “has any party been so bold as to fundamentally attempt to change the structure of this body … What shortsightedness, and what a price history will exact on those who support this radical move.”