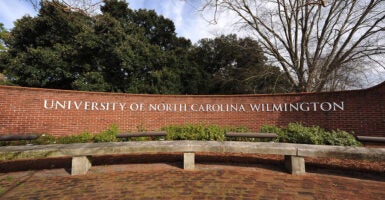 Innumerable college professors have lost their livelihoods to the cancel culture left. At the University of North Carolina at Wilmington, Mike Adams was one such victim. (Photo: Lance King/Getty Images)

It’s common knowledge that the radical left dominates academia. The left routinely purges those who go against its orthodoxy on college campuses, and in so doing solidifies its grip on education.

The following are eight victims of the left’s crusade to silence anyone who diverges from the approved points of view.

Mike Adams was a criminology professor at the University of North Carolina at Wilmington. An outspoken conservative, Adams was the subject of a campaign to get him fired.

In June 2020, two petitions on Change.org pressured the school to fire him. An open letter signed by hundreds of criminology professors and graduate students from around the country criticized Adams for what they perceived as “hate speech.”

In one post, Adams wrote, “Don’t shut down the universities. Shut down the non-essential majors. Like Women’s Studies.” In another, he wrote, “Let’s make it illegal to mutilate the genitals of the mentally ill.”

In the open letter, the aggrieved academics and students wrote: “Professor Adams hides behind the veil of ‘free speech,’ but through his rhetoric on Twitter and his column, he has harassed, threatened, and spread hateful speech against students and faculty.”

To get rid of him, the school reached a settlement with Adams to have him retire early, in August 2020, in exchange for $504,702.76 paid out over the course of five years to cover lost salary and retirement benefits.

Adams would never collect the full settlement, however.

In July 2020, Adams was found dead at his home by police. He died of a gunshot wound that coroners would later confirm was self-inflicted.

One of Adams’ colleagues at the University of North Carolina at Wilmington, L.J. Randolph Jr., appeared to minimize Adams’ death, tweeting: “Please do mourn Mike Adams’s death, but don’t sugarcoat his rhetoric as merely “controversial” or “racially charged.” He was blatantly racist, homophobic, and sexist, and his own words left no room for interpretation on any of that.”

A former Portland State University professor, Peter Boghossian made news when it was revealed that together with fellow academics James Lindsay and Helen Pluckrose, he had been submitting ludicrous academic papers to social science journals to see whether they would be published. Boghossian and company submitted the papers to prove that modern social sciences had a problem with academic rigor, along with weakening standards for what was considered good research.

The students at Portland State University also disliked how Boghossian prioritized diversity of thought in his classroom. Boghossian was the target of harassment, including graffiti in the shape of a swastika featuring his name and a Title IX probe that alleged Boghossian beat his wife and children.

While the probe went nowhere, Boghossian was required to attend school-mandated coaching and was banned from teaching things in a way that might reveal his views on “protected classes.”

In the face of all these campaigns to discredit or fire him, Boghossian resigned.

In an open letter announcing his resignation, he wrote:

Portland State University has failed in fulfilling [its duty to free thought]. In doing so, it has failed not only its students, but the public that supports it. While I am grateful for the opportunity to have taught at Portland State for over a decade, it has become clear to me that this institution is no place for people who intend to think freely and explore ideas.

Gregory Manco had been a non-tenured assistant math professor and volunteer assistant baseball coach at St. Joseph’s University in Philadelphia, starting in 2005. Last February, Manco made a series of tweets on an anonymous account critical of reparations for slavery and racial-sensitivity training. A St. Joseph’s student somehow recognized the account was Manco’s and reported it to administrators, leading the school to launch an external investigation and put him on paid leave indefinitely.

Manco claimed in an interview with Philadelphia Weekly that he “received an anonymous email from a student, sympathetic to me, alerting me that screenshots of tweets of mine were being circulated along with encouragement to contact the school to get me fired.”

Manco continued, “Within four hours, I was placed on paid leave.”

In May, the results of the investigation found that Manco had not violated school policy. Nevertheless, the school decided not to rehire him in July, claiming his services were no longer required.

The move angered St. Joseph’s University’s donor base. After Manco’s firing, a group of alumni came to campus protesting Manco’s treatment by the administration and claiming they would stop donating unless “the creeping illness that seems to be taking over the college” was cured.

The school’s website still lists Manco as faculty, but when The Daily Signal contacted St. Joseph’s University to verify that, the school was unable or unwilling to provide a response as to Manco’s employment status.

John Staddon, a distinguished professor emeritus of psychology and neuroscience at Duke University, was removed from the American Psychological Association’s email discussion group after he made a comment suggesting that there were only two sexes.

During a discussion on whether or not there were more than two sexes, Staddon wrote, “Hmm … Binary view of sex false? What is the evidence? Is there a Z chromosome?” The email group’s three presidents then informed Staddon that due to his rhetoric, he was no longer welcome in the discussion thread.

In response to his removal, Staddon said,

It is sad that an audience of supposed scientists is unable to take any dissenting view, such as the suggestion that there really are only two sexes. Incredible! I don’t mind having one less distraction, but I think you should really be concerned at Div 6’s [the people responsible for maintaining the discussion group] unwillingness to tolerate divergent views.

Back at Portland State University, political science professor Bruce Gilley has faced a number of cancellations. In 2017, Gilley released a controversial article, “The Case for Colonialism,” in a scholarly journal, attempting to argue that colonialism was beneficial to the countries being colonized.

The editor of the journal soon began receiving “serious and credible threats of personal violence,” leading Gilley to withdraw the piece in an attempt to protect the staff.

GIlley came under fire again in 2020 when his book, “The Last Imperialist: Sir Alan Burns’s Epic Defense of the British Empire,” was canceled after an avowed Maoist professor in Canada, Joshua Moufawad-Paul, started a petition arguing that Gilley’s book promoted “pro-colonial” and “white nationalist” views.

In September, the book was published by Regnery Gateway, a publishing house known for printing conservative books.

A former psychology professor at the University of Central Florida, Charles Negy was fired after 22 years of service for criticizing the idea of systemic racism and white privilege.

During the racial riots in June 2020, Negy tweeted, “Black privilege is real: Besides affirm. action, special scholarships, and other set-asides, being shielded from legitimate criticism is a privilege.” That tweet has since been deleted.

In response, a petition went up on Change.org, calling on the school to fire Negy.

“We are calling on the University of Central Florida to dismiss psychology professor Charles Negy due to abhorrent racist comments he has made and continues to make on his personal Twitter account,” read the petition.

The school then launched an investigation into Negy, and the resulting report  was used as justification to revoke Negy’s tenure and fire him.

According to The College Fix, Negy is in the process of fighting back against the school for what he views as an attack on academic freedom and free speech.

Neal-Boylan was the dean of the University of Massachusetts at Lowell’s Solomont School of Nursing before she was fired for using the phrase “everyone’s life matters” in an email.

In June 2020, Neal-Boylan sent an email to students about the racial unrest that defined that summer.

“I am writing to express my concern and condemnation of the recent (and past) acts of violence against people of color,“ wrote Neal-Boylan before continuing: “BLACK LIVES MATTER, but also, EVERYONE’S LIFE MATTERS.”

Upset with the email, one student posted the email in its entirety on Twitter. “An upsetting statement made by the Dean of Nursing at UMass Lowell, including the statement ‘all lives matter’ was uncalled for, and shows the narrow-minded people in lead positions,” she wrote. “A sad day to be a nursing student at UML. Dean Leslie Neal-Boylan, your words will not be forgotten.”

Within a day, the university responded by stating that black lives mattered and releasing a statement. Two weeks later, Neal-Boylan was out of a job.

Hiers was a math professor at the University of North Texas who was fired after he made a joke about campus fliers on microaggressions, calling them “garbage.”

In November 2019, Hiers was in the university’s staff lounge when he noticed a pile of fliers discussing microaggressions. After reading them, Hiers wrote a joking message on a nearby chalkboard, reading “Don’t leave garbage lying around.”

University of North Texas math department Chairman Ralf Schmidt was not amused. He reprimanded Hiers, and said that his joke was “stupid” and “cowardly.” The week after the incident, Hiers was fired.

Hiers sued the school with the assistance of Alliance Defending Freedom, a nonprofit legal-aid group. Currently, the group is waiting on the judge in charge of the case to resolve a motion to dismiss.