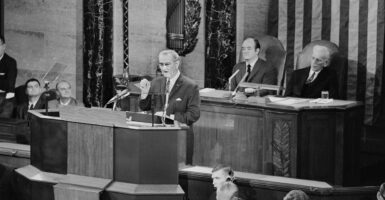 The left believes that government spending is the solution to reducing poverty. It all started under former President Lyndon B. Johnson who declared an “unconditional war on poverty in America” in his State of the Union address in January 1964. Pictured: Johnson delivers the State of the Union address in 1969. (Photo: Universal History Archive/Universal Images Group/Getty Images)

One great mystery is the persistent refusal of those on the left to abandon what is clearly not true.

That is, that the means for reducing the burden of poverty is more government spending.

It all really started in the 1960s under President Lyndon B. Johnson. He declared in his State of the Union address in January 1964 an “unconditional war on poverty in America.” Despite tens of trillions of spending since then, poverty remains, and so does the conviction of progressives that it can be wiped out with government spending.

Worth recalling is that the avalanche of government spending launched in the 1960s was followed in the 1970s by runaway inflation.

We now face the latest round of this misguided idea with the expansion of the child tax credit in the Build Back Better Act—now derailed thanks to Sen. Joe Manchin, D-W.Va.

Fellow Democrats are now all over the beleaguered senator for allegedly not caring about child poverty.

In a particularly destructive move, they detached any work requirement from receiving the child tax credit.

A team of University of Chicago economists estimates providing a new generous child tax credit, with no work requirement, would result in 1.5 million parents leaving the workforce.

More government, less work. This is somehow the answer that Democratic Party leadership is serving up to us for how to build a better future for our nation.

Where does the passion of Democrats really lie—in improving lives of Americans or in dramatically expanding government?

Equally revealing is what does not interest progressives at all.

A little more than a decade ago, Ron Haskins and Isabel Sawhill at the Brookings Institution publicized what they called the “success sequence.”

The success sequence consists of three steps in behavior to avoid poverty. Complete at least a high school education, work full time, and wait until age 21 before getting married and then having children.

According to testimony of Haskins in the U.S. Senate in 2012, those following the “success sequence” have a 2% chance of being in poverty and a 75% chance of reaching the middle class.

Also of little interest to our progressive friends is that larding down our economy with massive amounts of government retards economic growth. Why would anyone think slow economic growth is good for the poor, let alone any American?

As Americans allow themselves to be convinced that government is the answer to their lives, they become more likely to abandon faith and religion, which provide the light and principles for individuals to take control of their own lives.

New data from the Pew Research Center shows the toll that secularization is taking on our country.

Perhaps as we close out 2021, we should again recall the words of America’s first president, George Washington, in his farewell address.

“Of all the dispositions and habits which lead to political prosperity, religion and morality are indispensable supports. … And let us with caution indulge the supposition that morality can be maintained without religion. Whatever may be conceded to the influence of refined education on minds of peculiar structure, reason and experience both forbid us to expect that national morality can prevail in exclusion of religious principle.”