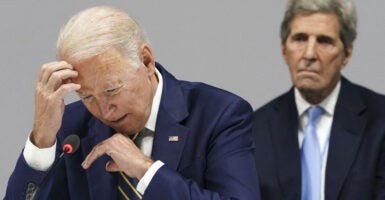 President Joe Biden and his energy czar, John Kerry—seen here attending a meeting of the U.N. Climate Change Conference in Glasgow, Scotland, on Nov. 1—were cavalierly dismissive of the thousands of people they put out of work by canceling the Keystone XL pipeline. Kerry said they could find new jobs making solar panels. (Photo: Kevin Lamarque/AFP/Getty Images)

Eric Scheiner is the director of MRCTV.org

With the stroke of a pen, Biden canceled a project that would have boosted U.S. gross domestic product by more than $3 billion, carried 830,000 barrels of oil daily from Canada to the United States, and directly and indirectly provided up to 26,000 jobs—11,000 of which were instantly lost.

Climate czar John Kerry lent a sympathetic voice to the plight of the newly laid-off workers: “Go to work to make the solar panels.”

Then-President Donald Trump had greenlit the project in 2017, after years of delay from the Obama administration.

Though the Keystone XL pipeline project received a favorable environmental review from the U.S. State Department, and construction had already started (crossing the Canadian-U.S border), the Biden administration bowed to radical environmentalists and the “religion” of climate change, leaving hardworking Americans in the cold.

Oil is the lifeblood of our economy and critical to our energy security, but the personal toll may be the highest cost of all: livelihoods, hopes, and dreams dashed in an instant.

Philip, South Dakota, is one of the many towns that the Keystone XL pipeline construction passed through. With the construction came construction crews, and entrepreneurs who provided both the workers and the pipeline project the services they needed—from pipe storage to places to live, eat, and work out. All of it is now extinguished.

“When they came in with a stroke of the pen, everybody was upset. That’s an understatement,” says Jeff Birkeland, chief executive of West Central Electric, which would have served pump stations across the Keystone XL route. He added:

I think the true characteristic of how people felt—they were p—ed off. Everybody had spent money, the project was underway, people were here. They were building. We could see progress, and just like that, it’s gone.

Tricia Burns, co-owner of Ignite Wellness Studio, which lost half its memberships in one day, added:

Every job matters; not just one, not just 11,000. A family has been impacted negatively, and we don’t know why.

There was no breach of contract. There were no broken rules. It was just that President Biden signed an executive order that said, ‘No more.’

We recently traveled to hard-hit towns in South Dakota and Montana to interview residents and business owners like Birkeland and Burns to learn firsthand how Biden’s callous decision to shut down the pipeline has negatively impacted these communities.

The corrupt corporate media will not report the devastating effects on local communities of the Keystone XL pipeline cancellation, so we’re taking the reins to bring the truth to the American people with our documentary “Killing Keystone XL: How Biden and the Far Left Destroyed American Energy Independence.”