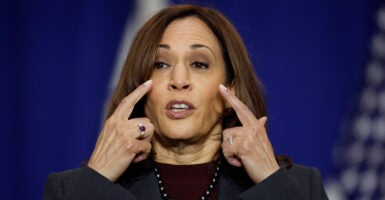 When asked her "biggest failure," Vice President Kamala Harris—seen here Dec. 13 in Brandywine, Maryland—said it has been not getting out of Washington enough. Brandywine is just 27 miles from Washington. (Photo: Chip Somodevilla/Getty Images)

Vice President Kamala Harris denies people within the White House are trying to undermine her.

Appearing on CBS’ “Face the Nation,” host Margaret Brennan asked Harris about gossip that she is being set up to fail. Harris responded: “No, I don’t believe I’m being set up to fail. I’m vice president of the United States. Anything that I handle is because it’s a tough issue, and it couldn’t be handled at some other level.”

A critic might suggest her statement means that what she has been assigned to do—most importantly, to fix the border problem—can’t be handled at the level of the president. That’s probably not what she meant, but how else to decode her statement?

A vice president is not independent of a president and must carry out his wishes. If the border isn’t being secured, if other projects assigned to her are failing (and what are they?), the buck stops with the president.

When asked her “biggest failure,” Harris said it has been not getting out of Washington enough. That’s easily fixed, since she has access to a government plane that can take her anywhere in the world.

Let me suggest a way for her and the president to succeed in her assignment to solve the border problem: Take the materials that taxpayers have already paid for and are lying on the ground, and finish building the wall and making sure those who have entered the country illegally get vaccinated.

If the Biden administration’s policies were working, both his and her poll numbers would reflect their success.

The most recent example is the election of Winsome Sears, the incoming lieutenant governor of Virginia. There has been no major media fawning over Sears (except on Fox News), no statements about how her victory advances the interests of African Americans and boosts the image of the GOP as less white and male.

That’s because the media and the left are not in sync with Sears’ conservative beliefs and her refusal to accept the false notion that black Americans are victims who are unable to do much without the help of government. That’s worse than a double standard. It is its own form of bigotry.

In the Brennan interview, there is no mention of a connection between Biden administration policies and inflation that has caused large increases in the price of daily essentials, including gasoline and food.

Nor is there an acknowledgment that the president has failed to shut down COVID-19 as he promised he would during the campaign. In a videoconference call with governors on Monday, the president said there is “no federal solution” to the pandemic. That’s not what he suggested during his campaign for the job.

The public isn’t being fooled by all the blather coming from Harris and President Joe Biden.

In less than one year, the president and Harris have taken the economic and border successes of the Trump administration and turned them in the opposite direction. The two appear weak and indecisive.

Voters are noticing. Polls show a red wave coming in the next election. It could be one reason why several on Harris’ staff have departed, and rumors are swirling of discontent among those who remain. It may also have contributed to retirement announcements by 15 House Democrats (so far). 2022 is not looking good for them, their party, or the country.