Wokeism Ended His Father’s Teaching Career. Now, This Teacher Has a Warning for Other Educators. 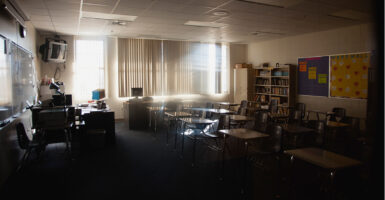 It was 9 o’clock on a Wednesday night. Albert Paulsson, who teaches high school civics in New Jersey, had finished another long day in class. He sounded tired when he answered my call.

“Is this still a good time to talk?” I asked.

Paulsson assured me it was.

He wanted to share some concerns over what he sees happening in public education–concerns about students being fed one-sided, woke perspectives and narrow definitions of words such as “equity” and “diversity.”

But most of all, Paulsson, 49, wanted to tell me about his father, Martin Paulsson, who was his inspiration for becoming a teacher. The elder Paulsson, however, wound up a victim of the politically correct culture that now dominates education.

Martin Paulsson, born in 1942, put himself through school at Trenton State College in New Jersey, graduating in 1967. He decided to teach history and went on to earn his master’s degree and doctorate in history from Rutgers University.

He taught at a local public school in New Jersey and was  a professor at a couple of colleges in the state over the course of a nearly 50-year teaching career.

Albert Paulsson says that for his father, teaching was far more than a job.

“What mattered most to my dad was helping other kids, especially those who were from disadvantaged backgrounds,” he told me.

His father taught high school students for about 40 years and gravitated toward the children “who really needed to be uplifted,” he said.

Growing up, Paulsson remembers, his father supported his students and often took time to talk with them or simply be a listening ear.

When he died in 2020, many former students sent letters to Paulsson, expressing how much his father had meant to them.

“You were like a second father to many,” one wrote.

Another student from the class of 1977 said Martin Paulsson was “one of the best teachers I ever had,” and detailed his influence:

I distinctly remember his Bill Buckley perspectives [that] he brought to challenge us to think, to opine, and to argue our points with as much clarity and forcefulness as we could. He tied current events in with history, got everybody involved and helped us all see that all opinions matter, just so long as you could back it up. He was always energetic and positive and there is at least this one guy who has had a better life because of his presence.

After Martin Paulsson retired from teaching high school in 1998, he continued teaching history at a local New Jersey college. That’s where the veteran teacher first experienced the effects of woke cancel culture.

Here is how his son recounted the story:

In 2017, the elder Paulsson had a student in his world history class who was a particularly excellent writer. Her work stood out among other students, and he read one of her papers aloud to his class to highlight the quality of her writing.

The pair developed a wonderful relationship as teacher and pupil, Paulsson said, and they would joke with one another often in good fun.

The student “would tease him once in a while and call him ‘a crazy old white guy’ and he would tease her back,” the son recalled.

“It was this endearing sort of teasing, of just having a good time, because it [was] a relationship of trust and they really thought the world of each other,” he said.

At the end of the semester, the student again wrote an excellent paper. The professor congratulated her and teased: “Not bad for a girl.”

The two laughed because “that was their relationship,” Paulsson said. But sitting a couple seats over was a student majoring in gender studies who did not find the comment funny. This student reported Paulsson’s father to school administrators.

The college didn’t take any disciplinary action, but the incident was noted in his father’s file, he said.

The following semester, the elder Paulsson again was teaching a history course; an African American student in his class aspired to become a history teacher himself. The student visited the professor on occasion during office hours to talk about teaching. The two developed a good relationship.

One day, Paulsson’s father was teaching the class about groups that form or emerge in society to push back on certain norms. He gave the example of the organization Black Lives Matter and asked the African American student if he would share a little bit about his own experience as a young black man in America.

The student shared some thoughts and seemed pleased to have the opportunity to do so, Paulsson said.

But another student in class didn’t find it appropriate for a white teacher to ask a black student to share his experiences. The professor again was reported.

The college gave Paulsson’s father a choice between resigning  or taking a semester off and completing “cultural sensitivity” training, at the end of which he would appear before a panel to be questioned.

“My father, at that point, he was just exhausted,” Paulsson said, as well as “demoralized by it.”

The professor chose to end his 50-year teaching career in 2018.

Martin Paulsson died in April 2020, a little over a year after he stopped teaching.

His father’s final year of life was hard, Paulsson said, because he no longer had “that stimulation and that sense of connection, that love and passion he had for teaching, that was taken away from him.”

What happened to his father reflects a larger issue in academia, Paulsson said.

“Because students are now being conditioned to basically look at the world based on their feelings, if something is disagreeable to their emotional well-being, well, then it’s unacceptable and therefore it has to be eliminated or in some way silenced,” he said.

The younger Paulsson has taught for 23 years and currently teaches Advanced Placement government, economics, and a course on the Constitution at a public high school in New Jersey. He says he is concerned that woke culture, long present on college campuses, is now trickling down to high schools.

“Teachers and students across the country don’t feel comfortable sharing certain things, certain opinions, certain perspectives,” Paulsson said, adding that he thinks this is a sign that “our education system is deteriorating.”

Paulsson says he is careful not to share his political views with students because he feels it would be unfair to them. But students have told him that he is the exception because most teachers are overt about their political views.

Students have thanked him for allowing a variety of views to be expressed in his classroom, Paulsson told me.

Last summer, Paulsson attended a workshop for teachers in his school district. One of the slides presented contained a quote from the late Brazilian educator Paulo Freire, a known Marxist, in essence claiming that there is no such thing as an apolitical classroom.

Paulsson says his concern is that teachers now are encouraged to be activists instead of educators. Words such as “diversity, inclusion, and equity” are manipulated in schools to push an agenda, he said.

“What concerns me is how … so much of the material that’s given to teachers is really just focused on this sort of postmodern state of society,” Paulsson said, adding:

We must be honest about the past. But then we need to build from that to work together to establish bonds of affection and trust for each other, to recognize our common humanity and the dignity of each individual. And to continue to move toward a more perfect union. Yet, so much that is being pushed is going to erode all of that.  Theories that are being presented as truth serve to divide, polarize, and condition contempt for concepts like merit and historical figures like Abraham Lincoln.

To prevent other teachers from suffering the same fate as Martin Paulsson, there must be a shift in the education system.

The focus of education, his son says, should be ensuring that “each and every student has access and opportunity to fully develop their potential.”

It’s time to return to that focus, he said.