Why Hasn’t Jussie Smollett Been Charged With Perjury? 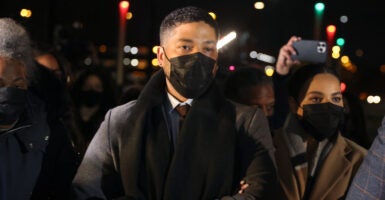 Jussie Smollett, pictured, insisted an attack against him by supporters of then-President Donald Trump happened, but it never did. So why doesn't he face a charge of perjury? (Photo: Scott Olson/Getty Images)

This did not wear well. On Feb. 22, 2019, a story posted on Gentleman’s Quarterly website was headlined: “The Racist, Homophobic Attack on Jussie Smollett Is America’s Endgame. When one of the most famous black and gay men in America is not safe, the message is clearer than it has ever been.”

One of the most famous black and gay men? Count me among the multitudes who said, “Who is Jussie Smollett?”

GQ.com, of course, referred to the alleged hate crime committed one winter night in Chicago against actor Smollett, coming back from Subway toting a tuna fish foot-long sandwich. He claimed his attackers were then-President Donald Trump-supporting thugs who yelled racial and homophobic slurs. The tale quickly fell apart, but not before the “America is systemically racist” media and political ambulance chasers weighed in.

The soon-to-be presidential candidate former Vice President Joe Biden tweeted in January 2019: “What happened today to Jussie Smollett must never be tolerated in this country. We must stand up and demand that we no longer give this hate safe harbor; that homophobia and racism have no place on our streets or in our hearts. We are with you, Jussie.”

Biden’s future running mate, Kamala Harris, tweeted: “Jussie Smollett is one of the kindest, most gentle human beings I know. I’m praying for his quick recovery. This was an attempted modern day-lynching. No one should have to fear for their life because of their sexuality or color of their skin. We must confront this hate.”

Rep. Maxine Waters, D-Calif., tweeted: “Jussie is my friend—a very talented and beautiful human being. It is so hurtful that homophobic haters would dare hurt someone so loving and giving. I’m dedicated to finding the culprits and bringing them to justice. Jussie did not deserve to be harmed by anyone.”

Even after a Chicago grand jury determined that Smollett staged it and criminally indicted him, he insisted that the crime took place. Now facing several criminal charges of staging the attack and lying to the police, Smollett pled not guilty and even took the stand and insisted he did not fabricate the assault.

The only thing missing from his bizarre testimony was a laugh track. A few days ago, the jury found him guilty of five of six charges.

Why does he not face a charge of perjury? According to Illinois law: “A person commits perjury when, under oath or affirmation, in a proceeding or in any other matter where by law the oath or affirmation is required, he or she makes a false statement, material to the issue … knowing the statement is false.”

In 2019, Wilfred Reilly, author of “Hate Crime Hoax,” found over 400 serious cases of alleged hate crimes from 2014 to 2019 that were later debunked. Reilly just upped the number of media-reported, but later debunked hate crimes, to nearly 1,000.

This brings us to MSNBC host Joy Reid. After the alleged Smollett attack, Reid tweeted: “Nooses never really disappeared as messages of a very specific kind of terror, but every time they’re used, my god, it’s chilling. Praying for Jussie’s full recovery. And for us all.”

But Reid also pulled a Smollett. In the mid to late 2000s, she published a blog in which she wrote a series of posts denouncing gays, including “most straight people cringe at the sight of two men kissing” and “adult gay men tend to be attracted to very young, post-pubescent types.”

The posts surfaced after Reid became a MSNBC host. She denied writing them and claimed her blog had been hacked. Like Smollett, Reid claimed to be a victim of a hate crime against her. The forensic specialist NBC hired to investigate her claim found no evidence of hacking. Reid apologized.

When the demand for hate crimes exceeds the supply, what to do? Fake it! The Rev. Al Sharpton and Tawana Brawley were not available for comment.

Finally, a message for Smollett. Consider these two words the next time you crave a midnight snack: Uber Eats.