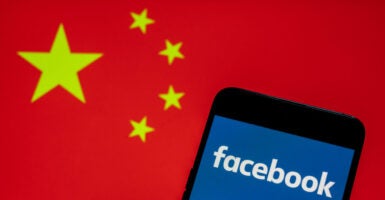 Dr. Li-Meng Yan, a Chinese virologist, escaped to America after facing threats for speaking out on the origins of COVID-19.

China couldn’t stop Yan from telling her story, so Facebook is stepping in to help the communist regime censor the whistleblower.

Last week, The Daily Signal published an exclusive interview with Yan about her research that COVID-19 was created in a Wuhan, China, research lab. Yan believes it was done with the approval of the People’s Liberation Army, the armed wing of Chinese Communist Party.

But when Facebook users attempt to share The Daily Signal’s story, it’s flagged with an obtrusive “partly false information” warning.

In at least one case, Facebook removed the post entirely and left this message in its place: “Independent fact-checkers reviewed the information and said it was partly false. The post is no longer available.”

The fact-check, conducted by Science Feedback, concluded, “The virus causing COVID-19 most likely evolved in natural wildlife populations before spreading to humans.”

Yan told The Daily Signal’s Fred Lucas a different story: “The virus actually does not come from nature. It came from the lab, the lab controlled by the Chinese Communist Party government and its military. … The Chinese government has developed a novel bioweapon.”

The doctor, who holds a medical degree and a doctorate in ophthalmology from Chinese universities, cites Chinese military documents to back up her claims.

Yan was warned not to go public.

“Be silent, don’t cross a red line. If not, you will be disappeared,” her supervisor at the at the University of Hong Kong told her in early 2020.

Yan was able to escape to America—only to discover that California-based Facebook is acting much like the Chinese censors she fled.

Why would Facebook censor her story? We asked the company and it shrugged off responsibility on the fact-checker:

Just as all fact-checks, if you wish to issue a correction or dispute a rating, we ask that you please contact the fact-checking organization directly. Third-party fact-checkers apply their ratings independently from Facebook and are responsible for responding to appeals. More information about the process can be found in our Help Center.

The Daily Signal is currently in the process of appealing.

Facebook has used “fact-checks” to censor content—a troubling pattern that limits the reach of outlets like The Daily Signal. In this case, a little-known fact-checker named Science Feedback did the dirty work on Facebook’s behalf.

Despite its claims that “COVID-19 most likely evolved in natural wildlife populations,” there’s no settled agreement on that point.

For example, President Joe Biden hasn’t ruled out the true origins of COVID-19. He tasked the intelligence community with the responsibility for finding out. Its 90-day investigation was inconclusive, “split on whether the virus was spread to humans from an infected animal or from a laboratory accident,” according to Politico.

In a response to the investigation, Biden said on Aug. 27:

Critical information about the origins of this pandemic exists in the People’s Republic of China, yet from the beginning, government officials in China have worked to prevent international investigators and members of the global public health community from accessing it. To this day, the PRC continues to reject calls for transparency and withhold information, even as the toll of this pandemic continue to rise.

Biden’s chief medical adviser, Dr. Anthony Fauci, director of the National Institute of Allergy and Infectious Diseases, has come under fire from members of Congress for funding “gain of function” research at a virology lab in Wuhan, China.

As early as Feb. 1, 2020, Fauci and other public-health officials “played a pivotal role in shaping the early views of several key scientists whose published papers and public statements contributed to the shutting down of legitimate discussion about whether a laboratory in Wuhan, China, might have ignited the COVID-19 pandemic,” USA Today reported.

Just this week, a Harvard scientist, Dr. Alina Chan, told members of Parliament in the United Kingdom that it is “reasonable” that COVID-19 could’ve been genetically engineered in China.

Yan is hardly alone in her beliefs about the origins of COVID-19. She was brave enough to speak out and tell her story. Shame on Facebook and its fact-checking minions for censoring it.

UPDATE—Dec. 21: Following an appeal from The Daily Signal, Science Feedback changed its rating from “partly false” to “missing context.”

Thank you for reaching out to us.

Upon reviewing your article, we rated it as Partly False as it contains a mix of accurate and inaccurate/misleading information. Virologist Li-Meng Yan’s claims to know for a fact that “the virus doesn’t actually come from nature; it came from the lab” and that it is “a novel bioweapon”. These claims aren’t new and are based on preprints, or non-peer reviewed scientific papers, in which she and others purportedly found evidence for those claims.

These preprints, which were uploaded to the server Zenodo in September 2020, were reviewed by multiple virologists then (see these reports by the Johns Hopkins Center for Health Security, MIT Press’ Rapid Reviews, and National Geographic) and found to contain unsubstantiated assertions and incorrect assumptions, as explained in our review. In fact, the preprints on Zenodo currently display a notice warning readers that the information contained therein is potentially misleading.

In spite of all the above, your article uncritically cited these preprints in the following statement “In the United States, Yan has published three reports arguing that COVID-19 was created in a research lab in Wuhan, China, with the approval of the communist regime’s People’s Liberation Army”, leaving readers with the false impression that the preprints provide reliable information that support Yan’s claims, when this isn’t the case.

The review we used to flag the article is aimed at alerting readers to the fact that scientific experts found Yan’s claims to be unsubstantiated and misleading. This is critical, given that your article fails to make any mention of the extensive criticism that Yan’s preprints had already received by other scientists, in spite of your claim that the article was “fact checked extensively”.

Our review doesn’t dispute the conclusions made by public health authorities and the U.S. government at the moment, specifically that exactly how the coronavirus SARS-CoV-2 began to infect humans remains unclear. It also doesn’t dispute the fact that a laboratory accident leading to infection remains a plausible scenario that needs to be considered, in light of the current absence of evidence to rule it out. But what is clear is that the evidence presented by Yan to support her claims that the virus is known to be engineered and is a bioweapon isn’t scientifically sound.

After reviewing Facebook’s guidelines on how to rate content that presents a conclusion not supported by the underlying facts, we have updated the rating to ‘Missing Context’.