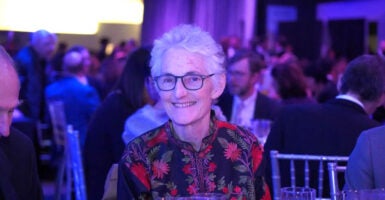 Those who had the opportunity to work with Linda Whetstone, or hear her speak, were inspired.  She was an enthusiastic mentor and real champion of academics exploring economic freedom, activists fighting corrupt governments, entrepreneurs, and those battling to protect free speech and private property. Whetstone died Dec. 15 at 79. (Photo: Atlas Network) 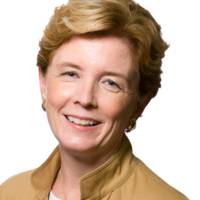 Bridgett Wagner is vice president of policy promotion at The Heritage Foundation.

The world has lost a great ally of freedom.

Linda Whetstone, daughter of entrepreneur and think tank pioneer Sir Antony Fisher, passed away unexpectedly on Dec. 15 at the age of 79.

Whetstone left a remarkable legacy of institutions, academics, students, and activists across the globe that have benefited from her tireless efforts to raise resources, share important texts, advise, open doors, and build a vibrant network of those who fight for freedom around the world.

Whetstone served as chairman of the board of the Atlas Network, an association of free market think tanks,  and of the Network for a Free Society, as well as president of the Mont Pelerin Society and as a board member and adviser of the Institute of Economic Affairs and Students for Liberty.

Those who had the opportunity to work with Whetstone, or hear her speak, were inspired.  She was an enthusiastic mentor and real champion of academics exploring economic freedom, activists fighting corrupt governments, entrepreneurs, and those battling to protect free speech and private property.

As Ed Feulner, founder and former president of The Heritage Foundation, of which The Daily Signal is the news outlet, noted:

Linda Whetstone had accomplished so much, touched so many lives around the world, and encouraged so many causes and institutes to take on the battle.

Her impact ripples across the globe and is visible in the work of the entrepreneur who can now sell his or her wares on the street without the harassment of corrupt officials, in the bustling private schools for the poor, in solitary academics who know they are part of a worldwide network and can share the greatest books and essays with students in seminars, thanks to her efforts to raise the funds and share the resources and spread the ideas of liberty.

She was a good friend of Heritage and of the think tank community. She will be deeply missed.

Indeed, to many of us who have long tracked economic freedom, recent years have served as a vivid reminder of the continuing struggle between the state and the free market.

In times of uncertainty, it might be natural that people will look to their governments for answers. Yet, the long-term solutions to various economic problems do not lie in more government controls and regulations. They lie in a return to free market principles.

Through the Network for a Free Society, Whetstone shared thousands of copies of books and more than 150,000 copies of the “Ideas for a Free Society” CDs packed with dozens of texts with professors and student leaders in 60 countries—many of them in hard-to-reach corners of the globe.

It was not unusual to get reports of librarians and teachers in Tajikistan or Burundi or South Sudan who wrote to ask if they, too, could get access to these ideas. And she delighted in sharing photos of student debates and training programs, and news of essay competitions and new institutions springing up as a result of this work.

As Atlas Network CEO Brad Lips noted, “No one had greater passion for elevating the voices of freedom’s champions in countries that are presently unfree.”

More than ever, ideas matter and have consequences, as Whetstone demonstrated in practice.

Honoring Whetstone’s memory, the State Policy Network said that “the liberty movement, worldwide and here in the [U.S.], will miss Linda’s presence, but she has left as her legacy a shining example of leadership, passion, and character that those of us in today’s movement can aspire to emulate.”

Truly, that’s what she left us. Rest in peace, Linda Whetstone.