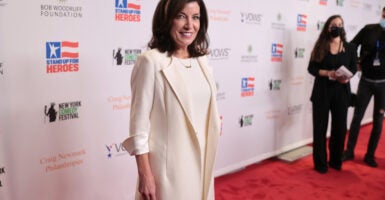 Hochul ordered every indoor business in the state to either check vaccine status at the door or require masks, with fines of up to $10,000 per violation from Dec. 13 to at least Jan. 15.

The 13 Republican counties fighting the mandate include the major New York City Suburbs of Nassau, Orange, Putnam, Dutchess, and Rockland counties, according to The New York Post.

“My health department has critical things to do that are more important than enforcing this and I think small businesses have been through enough already,” Orange County Executive Steven Neuhaus said, The New York Post reported. He said he was opposed to “using Gestapo tactics and going business to business and asking them if they are enforcing masking.”

“We don’t have the resources or even the desire to engage in a mandate that we don’t believe is going to produce a measurable outcome,” Dutchess County Executive Marcus Molinaro told The New York Post.

“What am I going to do, station somebody at a Walmart 24/7? It’s silly,” Greene County Administrator Shaun Groden commented, according to The New York Post.

Officials from other New York counties complained that they didn’t have the resources to enforce the mask mandate, and that it would distract from vaccination efforts, The New York Post reported.