Deadly Delays by the Food and Drug Administration 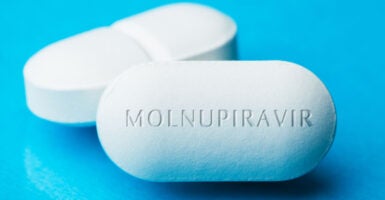 The United Kingdom has approved molnupiravir, Merck's coronavirus antiviral pill. In tests, it cut hospitalization by 30%. But we can't try it in America. "More input is needed," says the Food and Drug Administration. (Photo: Plyushkin/Getty Images)

COVID-19 deaths are up. Politicians tell us to wear masks and get vaccinated.

Amid the fear, I’m surprised that we haven’t heard more about two drugs that could make COVID-19 much less of a threat.

In blind tests, Pfizer’s Paxlovid was found to reduce the risk of hospitalization and death by 89%! It was so effective that Pfizer was advised to stop the tests.

“They halted the clinical trials!” exclaims Michael Cannon, director of health policy at the Cato Institute in my new video.

Excellent point. Yet that’s what the Food and Drug Administration is doing. They force us to wait until they’re sure all drugs “meet the agency’s rigorous standards.”

“If the [Food and Drug Administration] is following its current practice,” says Cannon, “it’ll be a matter of months.”

At the beginning of the AIDS crisis, the Food and Drug Administration delayed approval of many AIDS drugs. Some Americans formed “buyers clubs” to purchase AIDS drugs from Mexico. That’s what the movie “Dallas Buyers Club” was about.

But buying unapproved drugs from other countries is illegal.

But we can’t try it in America. “More input is needed,” says the Food and Drug Administration.

More input is always helpful, but our Food and Drug Administration is just slow.

“The United Kingdom approved molnupiravir back at the beginning of November,” Cannon points out. “The [Food and Drug Administration] didn’t even meet to decide whether to approve it until the end of November. In the meantime, thousands of Americans died.”

While people die, President Joe Biden praises the Food and Drug Administration for their “hard work.”

“We shouldn’t be praising them for doing a job that no one should be doing, which is violating your rights,” says Cannon. “If we just gave patients the freedom to purchase drugs other countries had approved, we would go a long way toward restoring your right to make your own health decisions.”

Food and Drug Administration regulators don’t want to kill people, but they do have an incentive to work slowly. If they approve a drug that hurts someone, they’ll get horrible publicity. They may get fired.

But when people die from delayed approval, no bureaucrat gets in trouble. We don’t know which people might have been saved.

“That’s why the [Food and Drug Administration] always tries to make sure that it never lets an unsafe drug on the market,” says Cannon. “Even if the cost is years of delay and many, many lives lost.”

His solution: Have no Food and Drug Administration.

I push back. “Some people would try drugs that would kill them.”

The Food and Drug Administration was created 100 years ago because some people were harmed by quack medicines. But of course, some still are.

“The entire premise of an agency like the [Food and Drug Administration] is that you’re not smart enough to make these decisions for yourself,” says Cannon.

“It’s not true that you’re not smart enough to make this decision yourself, John,” he says. “You can consult experts, your physician, medical journals, Consumer Reports. You can consult government regulatory agencies in other countries. Every day the [Food and Drug Administration] delays costs lives.”

Once a regulatory agency is created, we tend to assume that only government can do the job. But that’s not true.

“The [Food and Drug Administration] needs to get out of the way,” concludes Cannon. “Let patients make decisions for themselves.”