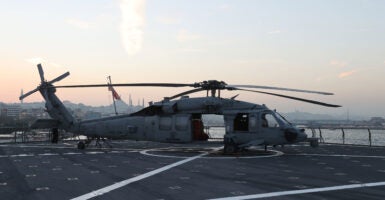 ’Tis the season of Christmas wish lists and New Year’s resolutions, so there are a few items that The Heritage Foundation’s Center for National Defense would love to see under the tree this Christmas.

As we close out 2021, we see Russian President Vladimir Putin massing more than 100,000 troops across from Ukraine, China conducting a nuclear breakout by building massive numbers of missile silos and testing new hypersonic weapons, and Iran working furiously to enrich uranium to weapons-grade for a nuclear weapon.

While no one wanted to witness such developments, the United States must act to protect its global interests.

While this list doesn’t include all of what the defense center’s team wishes for Christmas—for example, former Marine Dakota Wood’s personal desire for a new sniper rifle or former Air Force pilot John “JV” Venable’s wish for a high-performance Piper PA-32R aircraft—the following items, if Santa were able to bring them all, would contribute to a stronger U.S. national defense posture.

That said, here we go with what we hope for in 2022, in no particular order:

A 2022 National Defense Strategy should focus on the development of the concepts and necessary forces to counter nations that pose the greatest threats to America, while avoiding dwelling on issues such as climate change, COVID-19, and “equity,” which are more appropriately addressed elsewhere.

According to Secretary of Defense Lloyd Austin, we should see a new National Defense Strategy in the new year. Done correctly, that strategy could provide the lodestar for driving needed change in the Department of Defense for the next three years and perhaps beyond.

To be successful, however, the strategy must enjoy bipartisan support, be realistic about the threats that face America, and propose the ways and means that will allow the nation to protect its vital interests.

Proposals to rely more on allies must be tempered with the reality that many of our partners are already at the limit of what they can provide.  Once the strategy defines the forces needed to protect our country, America must provide the necessary resources to achieve those ends.

A new approach to defense planning is needed that recognizes what it will take to deal with the pressing threats to U.S. interests.

Current service programs—whether for new equipment, maintaining end strength (i.e., the size of the military), or undertaking various types of training—are premised on the assumption that the U.S. will not be embroiled in major combat operations until the mid-2030s.

Senior military leaders, civilian officials, and members of Congress readily state that countries such as China and Russia pose “threats” to U.S. interests, but the general lack of urgency, focus, and funding to rebuild America’s military to a level commensurate with what it would actually take to defeat the military force of a major, modern power belie their rhetoric.

As currently postured, the U.S. military is too small, too much of its equipment is too old, and the services conduct too little training that is relevant to large-scale combat operations against a major, well-equipped competitor.

We need a National Defense Strategy that addresses the world as it is; congressional support for a defense budget commensurate with what it takes to defend national interests in the real world; and the military services making a case for expansion, aggressive modernization, and a steely-eyed focus on combat readiness to ensure they can win the wars no one wants to see happen.

A budget should be able to build back a better Navy.

For decades, the Navy has had dreams of a right-sized fleet; that is, sized to the budget—as opposed to strategy or to the threat from China or Russia, as it should be.

This Christmas, on behalf of silent sailors everywhere, let’s wish for a shipbuilding budget that sustains building no fewer than 15 new ships a year through 2027.

After decades of financing the so-called post–Cold War “peace dividend” by cutting the Navy a total of $1.2 trillion, it’s time to reinvest in our Navy.

Had budgets just kept pace with actual inflation since 1989, it would be $49 billion more than today’s Navy budget.  This Christmas gift cannot wait, as 2027 is the year China is, by all indications, preparing for conflict with the U.S. to resolve the Taiwan issue.

After spending multiple trillions of dollars in the past year on dubious infrastructure projects, social programs, and inflation-generating welfare programs, the notion we don’t have the money for the Navy rings hollow.

For many years, the Government Accountability Office has noted the Navy’s dearth of shipyard capacity to maintain its fleet, with the norm being late completion of repairs and significant work backlog due to excessive wear on a too-small fleet.

The Navy has since asked for help with its Shipyard Infrastructure Optimization Plan, without which shipyards will be unable to accommodate 68 planned ship-maintenance cycles between now and 2040.

Regrettably, just meeting the planned requirements to modernize shipyards will not keep pace with the projected and needed growth of the fleet and at best would only address 67 of 68 missed maintenance availabilities otherwise.

That would be a massive improvement, but still leaves too little margin for unscheduled, emergent work, such as the recent grounding of the submarine USS Connecticut.

A new public shipyard to manage a growing nuclear submarine fleet would be the biggest gift of all. But to quote Oliver Twist, “Thank you, Sir, may I have some more … .”

An additional shipyard building frigates and destroyers would be grand.

It would also make it more likely the Navy reaches its 355-ship goal in the distant future and would add maintenance capacity, too.

The agreement would also provide full transparency to international inspectors, including “anytime, anywhere” inspections and a complete history of the possible military dimensions of Tehran’s nuclear program.

In addition, Iran would have to officially commit to never pursuing a nuclear weapon. A failure to achieve that vastly increases the likelihood of a nuclear-armed Iran under the control of a troubling regime.

A nuclear Iran would not only destabilize the Middle East, including threatening a U.S. ally and partners, but undermine global nonproliferation regimes—and eventually threaten the U.S. homeland.

None of that is acceptable.

A missile-defense review should continue the long-standing policy of outpacing the rogue-state threat to the U.S. homeland, commit to developing advanced missile-defense technologies, and prioritize defending key U.S. and allied assets around the world, such as on Guam.

Missile defense can help deter attack, allow time and space for diplomacy, and protect the U.S. and its allies should deterrence fail.

A strong missile-defense review will recognize and exploit these benefits provided by missile defense and reject Moscow’s and Beijing’s claims that U.S. missile defense is destabilizing.

It should also reject agreeing to any limits to missile defense that would impede the U.S. ability to defend itself in arms control negotiations with Russia and China.

A nuclear-posture review would align policy and strategy to address the increase in Russian and Chinese nuclear threats, rather than attempt to reduce the role of nuclear weapons at a time when nuclear deterrence is more important than ever.

A strong nuclear-posture review will fully support the ongoing nuclear modernization plan, to include the previous review’s proposal to develop a nuclear-armed, sea-launched cruise missile, and seek to adjust our future posture to account for China’s nuclear expansion.

The review should also reject any changes to nuclear declaratory policy that would lessen deterrence of the advancing Russian, Chinese, and North Korean threats and weaken our extended deterrence.

Santa, we know this is a lot to ask for, but we are convinced these things are necessary. Whether we like or not, the world has become less hospitable toward U.S. interests, and we need a strong military, backed up by vigorous policy, to counter these challenges.

This is the first of two articles. Part 2 will appear next week.