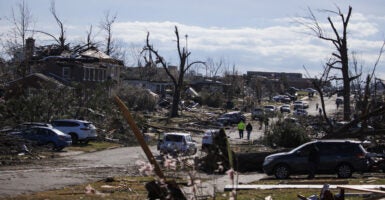 The total death toll from the tornadoes that hit the Midwest could surpass 100 after emergency responders clear the debris. Pictured: A general view of tornado-damaged structures in Mayfield, Kentucky. (Photo: Brett Carlsen/Getty Images)

Media outlets and liberals, including elected Democrats, were quick to blame climate change for the deadly tornadoes that ripped through the Midwest over the weekend.

President Joe Biden announced that he would ask the Environmental Protection Agency to conduct an investigation into the role climate change played in the storms that caused fatalities in Kentucky, Illinois, Missouri, Arkansas and Tennessee on Friday night. The total death toll from the tornadoes could surpass 100 after emergency responders clear the debris, according to Kentucky Gov. Andy Beshear who called the storm the worst in state history.

“All that I know is that the intensity of the weather across the board has some impact as a consequence of the warming of the planet and the climate change,” Biden told reporters on Saturday.

“The specific impact on these specific storms, I can’t say at this point,” he continued. “I’m going to be asking the [Environmental Protection Agency] and others to take a look at that. But the fact is that we all know everything is more intense when the climate is warming — everything. And, obviously, it has some impact here.”

The president approved an emergency declaration for Kentucky, allowing the federal government to assist in the cleanup and rescue efforts on the ground.

“We do see tornadoes in December, that part is not unusual. But at this magnitude, I don’t think we’ve ever seen one this late in the year,” Criswell told CNN’s Jake Tapper. “But it’s also historic. Even the severity and the amount of time this tornado, or these tornadoes, spent on the ground is unprecedented.”

“This is going to be our new normal and the effects that we’re seeing from climate change are the crisis of our generation,” she continued.

The five deadliest tornadoes in U.S. history occurred in 1925, 1840, 1896 and 1936, killing between 203-695 people each, The Associated Press reported. Environmental activists and liberals have argued over the past several decades that global warming caused by greenhouse gas emissions and industrialization is triggering more violent storms.

“The first thing the alarmists think of is, ‘how can we use this to advance our agenda?’” Steve Milloy, a former member of the Trump transition team, told the Daily Caller News Foundation. “That’s what they do nowadays. Every bad piece of bad weather is global warming.”

“They’ve got enough people in the media to go along with it that, you know, they get away with it,” he added.

Milloy said that fossil fuels are often vital for recovery efforts and save people from harm during major weather events. The amount of deaths caused by natural disasters has declined more than 96% over the last century, according to The Wall Street Journal.

But an Axios article published Monday said the tornado over the weekend “offers a grim climate warning,” while a Washington Post article cited scientists who argued “higher temperatures could add fuel to these violent disasters.”

“When you start putting a lot of these events together, and you start looking at them in the aggregate sense, the statistics are pretty clear that not only has there sort of been a change — a shift, if you will — of where the greatest tornado frequency is happening,” tornado expert Victor Gensini told CNN. “But these events are becoming perhaps stronger, more frequent and also more variable.”

However, Central Michigan University meteorology professor John Allen argued in a USA Today editorial that it was too early to speculate on whether climate change played a part in the deadly storms. He noted that “tornado outbreaks have occurred on nearly every day of the year” historically.

Still, liberals and environmental groups echoed the comments made by Biden, Criswell and Gensini.

“This climate disaster is about our electeds failing us, choosing to water down and delay climate bills instead of investing in infrastructure that will keep people safe,” Varshini Prakash, the executive director of the environmental group the Sunrise Movement, said in a statement.

Climate activist Alexandria Villaseñor tweeted that the “extreme and deadly future we keep warning you about is already here.”

“It’s only going to get worse from here,” actor and climate activist Mark Ruffalo tweeted. “Now is time to fight for our suffering and despairing youth.”