The ‘Woke’ Got What They Wanted—And Then What? 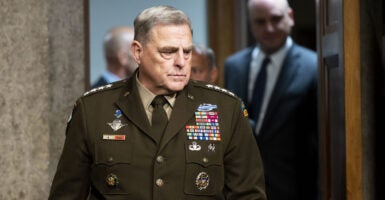 The “woke” movement was giddy after Jan. 20, 2021. The left controlled both houses of Congress.

President Joe Biden was drafted as the necessary veneer of 1980s Democratic normality to ram through an otherwise hard-left agenda.

All the major cultural, financial, economic, entertainment, and media institutions had played various roles in seeing former President Donald Trump not just defeated, but also impeached, twice. He was written off as persona non grata after the Jan. 6 riot at the Capitol.

So, academia, corporate boardrooms, Hollywood, the media, the Pentagon, professional sports teams, Silicon Valley, and Wall Street in near hysterical fashion all boarded the woke train. All boasted of ferreting out “white rage” and hiring legions of “diversity, equity, and inclusion” czars.

“Crime” was to be seen now mostly as a construct created by the elite to protect their own privilege, prerogatives, and property. Shoplifting, looting, and street thuggery were just part of living in a normal city.

Green agendas, the left hoped, would fundamentally transform America in putting an immediate stop to man-made “climate change.” So, lots of oil and gas leases were either canceled or their fees vastly increased.

Pipelines were stopped. Gas and oil companies were warned that everything from lack of financing to new regulations would soon put them out of business. The golden age of wind and batteries was already upon us.

Modern monetary theorists assured us that printing money would “spread the wealth” and devalue the cash of undeserving capitalists who had too much of it. Printing more cash, they believed, would implant it in the hands of the needy who unfairly had too little.

To the extent inflation followed, it would be a good thing, they hoped, a sign of a newly empowered and robust consumer class long denied “equity.”

COVID-19 was virtually over. We were assured by Biden that Trump had killed over 350,000 Americans with his lax health policies. In contrast, Biden would soberly vaccinate us all, claiming the vaccine’s efficacy as his own. He predicted victory over the virus by the Fourth of July. The delta variant was still then just an obscure rumor from abroad.

The border would be opened—and stay open. No more walls. As citizens of the world, the left welcomed in 2 million immigrants who arrived illegally without audit or vaccinations during a pandemic.

As the woke drove terrified old liberal Democrats into hiding, all the old wisdom about human nature vanished. Forget that criminals hurt the poor the most. Discard the quaint idea of Martin Luther King Jr. that our character, not our color, determines who we are. Ignore the passe idea that inflation eats away at the wages of the working class.

We could always resume the quarantines, lockdowns, and shutdowns that made Amazon, Target, Walmart, and other conglomerates hundreds of billions in profit, while the mom-and-pop small businesses went broke.

So, what did the people conclude 10 months out from the woke getting their wishes?

The polls reveal that voters don’t like open borders at all. They disapprove of illegal immigration as much they support legal immigrants. They worry about crime and drugs. They don’t want the unvetted and unvaccinated flowing across their borders.

The people want cheaper, not pricier gas. They prefer American energy self-sufficiency. Why, with cup in hand, go begging to Saudi Arabia and Russia to pump more supposedly Satanic oil?

The people like the police and hate crime. Even the rich among the woke are now scared—some of whom sowed the wind of decriminalization and are themselves reaping the whirlwind of crime.

Most voters care less about our color, but far more about our character. They think a meritocracy, not quotas and tribal chauvinism, explains the exceptional American standard of life.

They despise inflation as much as recession, and fear they may now get both.

So, in just 10 months the left got what it wanted. And the people are becoming not just sick of what has followed, but disgusted. They are terrified that the left is not just failing, but also wrecking the country and them along with it.

The ages have left us adages for the people’s growing anger at the hubristic and now unpopular left. We know the ancient warnings variously as, “What comes around, goes around,” “You reap what you sow,” “Be careful about what you wish for,” and “The law of unintended consequences.”

Words like “nemesis and “karma” also come to mind. But of the collapse of the woke appeal, perhaps we could say, “It couldn’t happen to a nicer bunch of zealots.”