A Different Perspective on Global Warming 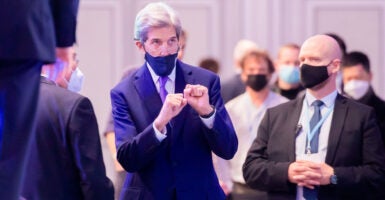 We have grown accustomed to climate change being talked about in a certain way. Usually, it involves words and phrases like “dangerous,” “catastrophe,” “red zone,” and “one minute to midnight.”

Equally dramatic are the policies proposed by many in Washington, D.C., to force a transition away from conventional energy to more politically preferred options. These admittedly painful changes, we are told, are urgently needed “for the common good.”

However, climate trends don’t support rapid economy-altering responses, and areas of uncertainty in our scientific understanding caution for humility in policymaking.

The United Nations’ Intergovernmental Panel on Climate Change recently reported that the earth has warmed 1.1 degrees Celsius since 1850. It noted increasing trends in heat waves, heavy precipitation, and some kinds of drought.

Sea level has been rising at roughly 16 inches per century. It also found downward or no trends for hurricanes, winter storms and extreme cold, floods, tornadoes, or thunderstorms. So, Florida may be dealing with flooding, but not necessarily from global warming.

The Intergovernmental Panel on Climate Change’s most extreme scenario for emissions and warming—the Representative Concentration Pathway 8.5, which has fueled the media’s apocalyptic “code red” reporting—was downgraded to “low likelihood.”

That was good news for scientific integrity more than anything else, as this alarmist scenario assumed such implausibilities as coal consumption per capita increasing sixfold by 2100.

The Intergovernmental Panel on Climate Change report begs a number of fundamental questions that should be the focus of meaningful scientific and political debate.

For example, what is the nature of global warming—is it a net positive change, negative, or some mix in between? What is the pace of future warming, and do we have trustworthy tools to make educated guesses?

Why is the climate pre-1850 so preferred such that policies by global warming catastrophists point to it as a target for policy? What is the “ideal” temperature?

Too many politicians, with a helping hand from media eager to sell bad news, have assumed the answers and ignored nuance. The reality is, there is considerable uncertainty. Just three, broad examples:

Climate models thus far have run “too hot” and been unable to faithfully replicate observed historical temperatures. There remains great uncertainty about just how much warming an increase in greenhouse gas emissions induces (called the “equilibrium climate sensitivity”). This reduces confidence that these computer models can accurately project future conditions.

Climate emissions scenarios have misframed policy discussions about how to respond. Far too many politicians, academics, financial institutions, and nonprofits continue to base their work on the Intergovernmental Panel on Climate Change’s worst and most unrealistic scenario (the RCP8.5 mentioned earlier).

Third, our understanding of an incredibly complex, dynamic climate is always changing and busting previous notions of scientific “consensus” (which is itself more a political term than a scientific one).

For example, a recent review by 23 scientists, who themselves have diverse opinions, expressed concern that the Intergovernmental Panel on Climate Change’s low-ball assumptions about the sun’s impact on global surface temperatures were “prematurely concluded” by forcing a consensus voice.

The answer to that question alone will have major implications for policymakers, whose efforts to tamp down man-made greenhouse gas emissions might be as good as spitting in the wind.

Noting deficiencies in our understanding of climate is not to dismiss science, but rather to illustrate how much more work needs to be done.

As scientific debates continue, history provides an interesting perspective even if it can’t answer questions about the future.

What happened in this past century of warming?

Extreme poverty—the norm for most of human history—plummeted 80%, thanks to economic growth and access to energy. Global crop yields of grains increased over 200%. Deaths from climate-related disasters decreased 96%.

As a percent of global gross domestic product, damages from natural disasters have actually declined since 1990. Air pollution in the U.S. (not to be confused with greenhouse gases) has declined 73% since 1980.

It’s important to acknowledge that many are concerned about global warming because they are concerned for their grandchildren and for the beautiful places we enjoy today. But history is riddled with stories of great harm done in the name of good intentions.

As we continue to improve our scientific understanding of climate, skepticism about climate policy is merited and serves as an antibody to flawed assumptions and preconceptions.