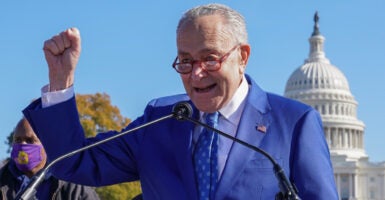 To bypass the debt limit protections enforced by the Statutory Pay-As-You-Go Act, liberals in Congress have introduced the Protecting Medicare and American Farmers from Sequester Cuts Act as a way to spend even more. Pictured: Senate Majority Leader Charles Schumer, D-N.Y., promotes the Build Back Better Act at a rally on Nov. 16. (Photo: Jemal Countess/Getty Images/SEIU)

Congress has unveiled a new proposal, the so-called Protecting Medicare and American Farmers from Sequester Cuts Act, and is promoting it with all the usual talking points that this is just normal legislation keeping the status quo going to obscure its true purpose.

In reality, the bill is a blank check that would make it easier to enact President Joe Biden’s radical tax and spending agenda. The bill text actually includes a blank line for a dollar amount, like you would see on a check.

Biden and his allies in Congress have been working for months to ram through a massive tax-and-spend bill, the Build Back Better Act. This big government, socialist legislation is meant to “transform our economy,” but it would only exacerbate increases in prices, labor shortages, and supply chain disruptions Americans are facing.

Because the Build Back Better Act would add nearly $800 billion to the deficit in just the next five years (even without taking into account the egregious budgetary gimmicks), liberals in Congress have proposed suspending the debt limit as well as waiving enforcement of the Statutory Pay-As-You-Go Act in order to pave the path for their partisan legislation.

The Protecting Medicare and American Farmers from Sequester Cuts Act includes all of these provisions.

The debt limit precedent that would be set by this bill would demolish one of our vital tools to limit the size, scope, and burden of the federal government.

The bill would allow the majority leader of the Senate to introduce legislation that would increase the debt limit by whatever amount the leader determines and then circumvent the normal 60-vote filibuster threshold in the Senate.

This would create an unprecedented process whereby the slimmest of congressional majorities can get a blank check at the expense of every American.

The two current methods to raise the debt limited—passage through the budget reconciliation process or meeting the 60-vote threshold in the Senate—are designed to preserve our fiscal future and limit the reach of the federal government into the wallet of every American.

This bill would destroy these safeguards and even literally give Senate Majority Leader Chuck Schumer a blank line to write whatever debt increase he wants.

This blank check could be used to usher in Biden’s sweeping tax and spending package, to ignore the federal government’s looming runaway autopilot spending, and to potentially implement yet more transformational expansions of government control.

This bill is effectively the same as a debt limit suspension—but with a potentially easier path to passage.

Schumer will likely fill in this blank check with a number that would allow for their ambitions to dramatically increase nondefense spending, enact their massive tax and spending package, and then leave them a large cushion for whatever other expansions of government they can dream up.

Instead of increasing the debt limit by a dollar amount based on a thoughtful and respectful legislative approach, this would simply be another institution pulverized into the paving stones that lead to a reckless agenda.

Make no mistake, this provision is simply one more attempt to ignore our looming fiscal issues and to expand the power of federal central planners.

Voting for a special process allowing an unlimited increase in the debt limit knowing full well how that process will be used is effectively the same as voting for that debt limit increase.

Congress must act to stop this attempt at a dramatic expansion of government and must implement reforms necessary to return to a stable fiscal path that will allow Americans now and into the future to prosper.

Any further expansion of government, and every day that we delay implementing these critical reforms, will make the looming fiscal crisis exponentially more disastrous.

Any increase of the debt limit must be accompanied by the following four conditions. Congress must:

Congress has racked up an eye-watering amount of debt since the start of the pandemic: $5.5 trillion, equal to about $43,000 for every household in the country—a product of the last blank check suspension of the debt limit.

While some of it was for response to the public health emergency, much of it (such as the $1.9 trillion package that Democrats passed earlier this year) was wasteful and opportunistic.

One of the few safeguards against reckless federal spending is the Statutory Pay-As-You-Go Act. When Congress passes laws that increase the deficit, PAYGO requires automatic spending cuts on a handful of federal programs.

In the context of over $5.5 trillion in total spending for the coming year, that’s a small haircut. Yet the prospect of that haircut is enough to cause an army of lobbying groups to besiege Congress.

A focal point of the current debate is Medicare. While the program provides benefit for millions of Americans, it has experienced unsustainable spending growth. The small reductions facing Medicare as a result of budget rules would not materially affect seniors and would barely make a dent in the relentless growth of the program.

Congress should not delay the Statutory Pay-As-You-Go Act spending cuts without replacing them with other spending reductions and reforms. Doing so would only make the nation’s dangerously high debt even bigger.

However, the Protecting Medicare and American Farmers from Sequester Cuts Act stops all enforcement of Statutory Pay-As-You-Go Act until January 2023.

In paving a path for enacting Biden’s reckless tax and spending spree, this legislation obliterates many of the fiscal safeguards meant to protect all Americans from ever-expanding government.

These safeguards are meant to respect the hard work of Americans that is undercut whenever the government spends money. Instead, the Protecting Medicare and American Farmers from Sequester Cuts Act would grant Biden a blank check with your name at the bottom.