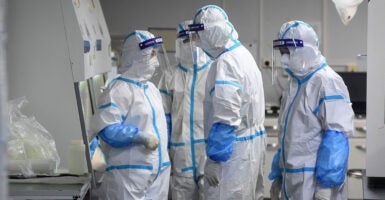 “I knew I had to find a way to deliver my message to the world ... before the Chinese government disappeared me," Dr. Li-Meng Yan says in an interview with The Daily Signal. Pictured: Lab technicians work Aug. 4 on samples to be tested for the novel coronavirus at a COVID-19 facility in Wuhan, China. (Photo: STR/AFP/Getty Images)

Update: On appeal, Science Feedback changed its rating of this report from “partly false” to “missing context.” The Daily Signal responded Dec. 21 by adding material highlighted below.

Dr. Li-Meng Yan, a Chinese virologist, says she was warned again and again in early 2020 by her supervisor at the University of Hong Kong.

“Be silent, don’t cross a red line. If not, you will be disappeared,” Yan recalled him saying in an interview Tuesday with The Daily Signal.

Yan escaped to America from Hong Kong in April 2020. In the United States, Yan has published three reports arguing that COVID-19 was created in a research lab in Wuhan, China, with the approval of the communist regime’s People’s Liberation Army.

Citing military documents to back up her claims, she writes of the novel coronavirus that causes COVID-19:

The virus actually does not come from nature. It came from the lab, the lab controlled by the Chinese Communist Party government and its military. … The Chinese government has developed a novel bioweapon.

Yan has a medical degree and a doctorate in ophthalmology from Chinese universities. She told The Daily Signal that she knew the Chinese government wasn’t telling the truth about COVID-19 as the pandemic emerged.

Yan was among the early whistleblowers who tried to get warnings out to Chinese citizens and, potentially, the world. She said she got some information out in January that forced the communist government to admit the disease could be transmitted between humans.

“I realized what happened. I [knew] it’s urgent,” Yan said. “I knew I had to find a way to deliver my message to the world. So I managed to find some person I can trust to deliver a message before the Chinese government disappeared me.”

In reference to China’s communist regime, the term “disappear” generally refers to someone being detained by the government for long periods of time without access to family or friends.

Chinese citizens reportedly can be gone for months before the government issues a statement that the individual is under investigation. In some cases, the government announces heavy sentences for such citizens.

In several documented cases, citizens challenged the government’s narrative on the origins of the new coronavirus.

Chinese journalist Zhang Zhan, the first to report on the spread of COVID-19, was arrested and detained in May 2020. In early 2020, Chinese authorities arrested Dr. Li Wenliang, an ophthalmologist, after he blew the whistle about the virus. He died in February 2020.

While Yan is able to travel in the United States and speak freely, she will not talk about where she currently lives, fearing retaliation.

Yan worked for the World Health Organization while a researcher for the University of Hong Kong, which she said asked her to investigate a “SARS-like” virus.

SARS, an acronym for severe acute respiratory syndrome, is a viral respiratory disease that first was identified in February 2003 in China and spread to four other countries.

During the investigation, she found what she said were similarities between a bioweapons program of the Chinese military and the COVID-19 outbreak. Her research reports cited People’s Liberation Army bioweapons textbooks from 2014 and 2015.

“The textbooks are very helpful to understand their bioweapon strategies,” Yan said of the Chinese government.

Though some at first mocked the idea, in recent months more evidence has prompted scientists and other public health officials to say the virus could have been born in a laboratory rather than a wet market, a public place that sells meat, fish, and other perishable goods.

A recent poll found that 72% of Americans said they believe it likely that COVID-19 began in a lab.

Nevertheless, Yan faced an onslaught of criticism from the mainstream media in America after her first public interview.

In a November 2020 news story, The New York Times called her a “right-wing media sensation” whose claims were pushed by a “collaboration” of far-right organizations and individuals to “peddle misinformation.”

The Times article asserted that the virus “almost certainly originated in an animal, most likely a bat.”

In a May news article, The Washington Post called Yan’s assertions part of a “sprawling disinformation network.”

“I received numerous attacks on social media and mainstream media from people who don’t understand what happened,” Yan said.

“Even as these attacks keep going on, my evidence is there,” she said, referring to parallels between Chinese military plans for bioweapons and the coronavirus detailed in her three published reports.

Mandiant Threat Intelligence—a global cybersecurity firm with offices in North America, Asia, Europe, and the Middle East—issued a report in September noting that hundreds of inauthentic pro-China accounts were spread across 30 social media platforms. The report also said that more than 40 websites were taking aim at Yan and others who questioned China’s narrative on the origin of COVID-19.

The social media accounts targeted Yan as well as exiled Chinese dissident and billionaire Guo Wengui and former Trump White House adviser Steve Bannon, according to the report. Identical posts called for Asian Americans to “fight back” against “rumors” from Yan and others.

Yan said that any funding of gain-of-function research at the Wuhan Institute of Virology with U.S. tax dollars from the National Institutes of Health was at most a minimal factor in the origin of the virus.

The term gain of function is defined as making a disease more transmissible or more dangerous for experimental reasons, as a way to test treatments. Yan said China has been developing the concept since the 1990s and would have obtained the funding by other means if necessary.

“But I always want to emphasize to people, that doesn’t mean the U.S. government was helping China to develop the novel bioweapon,” Yan said. “The money China puts in [for the research] is far more than the money it gets from America.”

Scientific Feedback cited these reports to dispute Yan’s account and concluded that COVID-19 “most likely evolved from natural wildlife before spreading to humans.” It also disputed the initial reporting by The Daily Signal on the interview with Yan.

The U.S. government hasn’t reached a conclusion either way on the origin of COVID-19.

In late May, President Joe Biden ordered the intelligence community to conduct a review of known facts. After a 90-day investigation, intelligence officials were “split on whether the virus was spread to humans from an infected animal or from a laboratory accident,” Politico reported.

This report was updated Dec. 21 to include U.S.-based sources that dispute Yan’s conclusions.