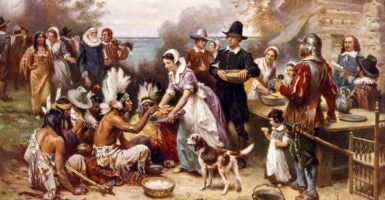 An artistic rendering depicts the first Thanksgiving in 1621, when Pilgrims and Native Americans gathered to share a meal. At Walt Whitman High School in Bethesda, Maryland, students were shown a video condemning the Pilgrims as "complicit" in stealing land. (Photo: Photo12/Universal Images Group/Getty Images)

The Howard Zinn-ification of American history has now been fully embraced by America’s institutions.

It’s not just on college and university campuses where the late Marxist professor’s anti-American history is popular.

An anonymous tip to The Daily Signal on Monday revealed that a video depicting the Pilgrims as one-dimensional oppressors was shown to students at Walt Whitman High School in Bethesda, Maryland, before Thanksgiving.

The Daily Signal reached out to Walt Whitman High School for comment, but there was no response.

D.C. Public Schools did something similar, issuing a statement to students on how to “decolonize” their Thanksgiving and to acknowledge stolen land at their holiday dinners.

The video shown to Whitman High students was narrated by activist and former United Nations delegate Larissa FastHorse, whose Thanksgiving message was that “we are all complicit in standing on stolen land.”

The historical tale being told here is nonsensical. It requires one to have a narrow and shallow sense of history, where groups of people are forced into silos to fit modern political notions of oppressors versus oppressed.

In FastHorse’s narrative, the Pilgrims’ only notable traits were that they “robbed graves” and “took land” of people who were living in what is today the United States. The origin of the Pilgrims, their ideas and motivations, are entirely irrelevant in her telling.

There was nothing about the Mayflower Compact or how the Pilgrim tradition was a key element in the formation of the United States as a self-governing society.

Any context for their actions is brushed aside. What matters is that they are portrayed as white European oppressors, who showed up and shattered a presumed utopia, where people did not seize land, spread disease, or brutalize their fellow man.

One could say the same thing about the Native American tribes of the New World, too.

The simplistic story of unique European oppression leaves out how some tribes were eager to enlist European newcomers in their wars to eradicate other Native American tribes in continuation of conflicts that long predated Europeans’ arrival.

The Wampanoags that partook in the first, famed Pilgrim Thanksgiving wanted a new ally to gain an edge against the powerful Iroquois Confederacy, a rival set of tribes in the Northeast region of what became the United States.

In the 1640s, the Iroquois waged a war of annihilation against the Huron and other tribes in the Great Lakes region in the so-called Beaver Wars. Just as various tribes, kingdoms, and nations went to war with each other in Europe, so too did the various peoples of the New World wage war on, enslave, and obliterate their neighbors.

The settled civilizations of South America, such as the Aztecs, used neighboring tribes as sacrificial cattle. Their downfall at the hands of Spanish conquistador Hernan Cortes came only with the help of those formerly oppressed tribes that hated the Aztecs more than the newcomers.

The world the Pilgrims arrived in at the Plymouth Colony was both blood-soaked and had changed hands many times long before they arrived.

If we really want to view history as some grand morality tale to find out who the angels and who the devils are, why should Native American Indian tribes get a pass as we condemn the Pilgrims?

The takeaway from the woke Thanksgiving video isn’t a historical one. It’s not created to give students a deeper or more complex understanding of the world or to teach them the details of history. Instead, it’s made entirely to fit a modern political agenda.

Unfortunately, the narrative weaved by the video shown to students at Montgomery County’s Whitman High is becoming common in K-12 schools, perhaps even more so in elite ones. That’s in part what the battle over critical race theory is about and why parents around the country are getting angry and organizing in opposition to its teaching.

Parents are catching on that critical race theory has nothing to do with teaching accurate history or creating better-informed citizens of a republic. Instead, it’s creating the foundation to divide ourselves into distinct classes of people separate from one another, based on the alleged crimes and grievances of our “ancestors,” who may or may not be our real ancestors at all.

This poison is being poured into schools and into the minds of young Americans to an alarming degree.

As former New York Times editor Bari Weiss laid out in City Journal, elite public and private schools are going all in on critical race theory and social justice. This is in part because they know this is the language and ideology of the ruling class.

Embracing stilted and narrow, almost absurdly negative and typically inaccurate tales about American history is how one now identifies with the new managerial elite that carefully excludes and silences all who don’t embrace “diversity, equity, and inclusion.”

At city council meetings across the U.S., the traditional Pledge of Allegiance to the flag is being replaced by “land acknowledgement” to various Native American tribes that passed through the area in times past.

In a sense, this is a new pledge of allegiance to woke ideology. And don’t be fooled by the talk of “reparations” or giving the land back. Those who promote this ideology have no intention of relinquishing their cultural, economic, and political power. If anything, their ideology sustains and justifies it.

Despite the name, this new class will not be inclusive, equitable, or diverse. It will uniformly conform to the ideology set by the institutions they control.

Their right to rule, as they see it, comes from being on “the right side of history”—whether that history is true or not.

Generations of Americans have now been raised with ideas like what was peddled in the video shown at Whitman High. But now instead of it just being a slice of education, it’s devouring everything. What was once a trickle is now a torrent.

Our country is drowning in a flood of wokeness that is corrupting our institutions, eroding merit, and pulling us apart as a people.