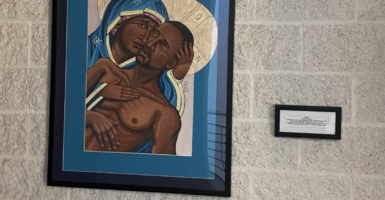 The Daily Signal obtained this photograph of “Mama,” a work depicting George Floyd as Jesus Christ that hangs in two locations at The Catholic University of America.

A prominent nonprofit that guides families in choosing faithful Catholic universities said Monday that The Catholic University of America is featuring images “inconsistent with Catholic education.”

“This painting dangerously confuses students about Christ’s divinity and perfection, reducing Jesus to a controversial and troubled public figure,” Patrick Reilly, president of The Cardinal Newman Society, told The Daily Signal in an email about the artwork portraying George Floyd as Jesus Christ.

Reilly said that the Pietà-style images profane “a divine image to make a political statement.”

This is “disrespectful regardless of the politics,” Reilly said of the painting, displayed at two locations by The Catholic University of America.

The Cardinal Newman Society, whose mission is to “promote and defend faithful Catholic education,” publishes The Newman Guide once a year to direct families toward devout Catholic colleges.

“The Newman Guide has helped thousands of Catholic families find and consider Catholic colleges that are faithful and committed to teaching and forming students in truth,” Reilly said. “We avoid snap judgments when colleges face new challenges, but we have both added and removed colleges from the guide when necessary.”

The Daily Signal first reported Nov. 22 that prints of artist Kelly Latimore’s painting depicting George Floyd as Jesus Christ were hung in both The Catholic University of America’s campus ministry office and its Columbus School of Law.

Floyd, a black man arrested for attempting to use a counterfeit bill to buy cigarettes, died on May 25, 2020, after a white Minneapolis police officer knelt on his neck for 9 minutes and 29 seconds.

A Catholic University junior told The Daily Signal at the time that the images are “just another symptom of the liberalization and secularization of our campus.”

Following the report by The Daily Signal, the Catholic University chapter of Young Americans for Freedom started a petition to remove the artwork. The petition had attracted over 5,000 signatures as of Monday evening.

In a Nov. 24 statement, Catholic University President John Garvey defended Latimore’s painting, titled “Mama,” and said that the school “declined suggestions in this case that we take the image down.”

Garvey said the artwork depicts “Mary holding the body of the dead Christ,” although Latimore has indicated repeatedly that his painting depicts both Floyd and Jesus.

“Many see the male figure as George Floyd, but our law school has always seen the figure as Jesus,” the Catholic University president said.

Press coverage led to criticism on social media and a “substantial number of emails and phone calls,” Garvey noted, adding that “some critics called the image blasphemous because they saw it as deifying or canonizing George Floyd.”

“Some comments that we received were thoughtful and reasonable,” he said. “Some were offensive and racist. Much of the criticism came from people unconnected to the university.”

Garvey also said that one copy of the painting had been stolen from its place outside the law school chapel. The university replaced the image with a smaller copy, he said.

Catholic University did not immediately respond to a request for comment from The Daily Signal as to whether its Department of Public Safety has determined who stole the painting.

The Newman Society, founded by Reilly in 1993, keeps careful watch over Catholic institutions across the United States. The group has heavily criticized institutions such as Georgetown University, the University of Notre Dame, and Boston College for departing from the Catholic faith.

Currently, the Newman Society website praises both Catholic University and its president, Garvey. The website lauds the university as “an authentically Catholic, comprehensive university located in our nation’s capital.”

“Catholic University has greatly strengthened its Catholic identity and academic prowess over the past several years, with changes ushered in since 1998 during the presidencies of Bishop David O’Connell and John Garvey,” the website says, describing the “bottom line” on Catholic University. “Today the undergraduate program can be an excellent choice for students seeking a mid-sized university in an urban environment.”

Reilly said Monday that the Archdiocese of Washington’s Commission on Sacred Art and Architecture is responsible for regulating the use of sacred images within its boundaries.

The Newman Society president quoted the Catholic Church’s Canon Law 1188, which states that sacred images in churches “are to be exhibited in moderate number and in suitable order so that the Christian people are not confused nor occasion given for inappropriate devotion.”

The Archdiocese of Washington did not immediately respond to a request for comment from The Daily Signal.