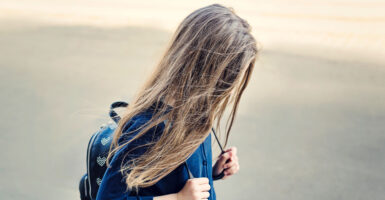 In school districts across the country, policies and administrators are facilitating troubled young students' gender confusion behind parents' backs. But with help from public interest law firms, irate parents are pushing back. (Photo: mrs/Moment/Getty Images)

The lawsuit filed Nov. 17 by two public interest law firms against the Kettle Moraine School District in Wisconsin over the clandestine social transition of a 12-year-old girl marks the latest in a series of cases where school officials allegedly initiated social gender transitions without parental consent.

The Wisconsin Institute for Law and Liberty, one of the public-interest firms suing the Waukesha-area school district, is also involved in litigation against the Madison Metropolitan School District. But one attorney involved in the litigation tells the Daily Caller News Foundation that policies and guidelines that are prompting schools to carry out clandestine transitions are in place across the country.

“[T]his sort of thing is metastasizing like a cancer underneath the surface around the country,” Vernadette Broyles, president and general counsel of the Child and Parent Rights Campaign, told the Daily Caller News Foundation.

‘Mom, I Had a Meeting Today’

Broyles represents Jeff and January Littlejohn in a lawsuit that alleges that Leon County Schools in Florida began helping their daughter transition without their consent after their daughter experienced gender dysphoria during the spring and summer of 2020.

Mrs. Littlejohn told the DCNF she emailed her daughter’s math teacher, explaining that they “weren’t affirming at home,” but that they “didn’t feel like we could stop our daughter from using a nickname.”

However, weeks later, Mrs. Littlejohn told the DCNF, her daughter made a shocking revelation while being picked up from school, saying, “Mom. I had a meeting today about my name, and they asked me which restroom I wanted to use.”

“I immediately was very upset, I was confused. I asked her to elaborate. What are you talking about, I don’t know anything about a meeting. And so I immediately emailed the guidance counselor, and I was called back with the assistant principal, which I thought, that’s also odd,” Mrs. Littlejohn told the DCNF.

“And they then told me my daughter was now protected by law under a nondiscrimination law, and they could not give me any information, because my daughter, who was 13 at the time, had to be the one to authorize my notification or attendance at the meeting,” she said, adding that when she initially called the school, they would not even confirm such a meeting had taken place.

A guide for employees of Leon County Schools in addressing LGBTQ students shared with the DCNF by the Child and Parent Rights Campaign includes the question, “A student has exhibited behavior in school leading administrators or teachers to believe the student is LGBTQ+. Should the parents or legal guardians be notified?”

“No. Outing a student, especially to parents, can be very dangerous to the student’s health and well-being. Some students are not able to be out at home because their parents are unaccepting of LGBTQ+ people out,” the “LCS Lesbian, Gay, Bisexual, Transgender, Gender Nonconforming and Questioning Support Guide” states. “As many as 40% of homeless youth are LGBTQ+, many of whom have been rejected by their families for being LGBTQ+. Outing students to their parents can literally make them homeless.”

After weeks of communications that failed to resolve the situation, the Littlejohns, backed by the Child and Parent Rights Campaign, filed suit in federal court on Oct 18.

Leon County Schools did not respond to the DCNF’s request for comment.

‘Even Over Her Parents’ Objection’

In Wisconsin, parents faced a similar situation in the Kettle Moraine School District, located near Milwaukee. After the parents told a guidance counselor and the principal at Kettle Moraine Middle School of their daughter’s struggle with gender dysphoria, the principal’s response on Jan. 20 left no room for doubt that their wishes would not be respected, according to legal documents.

The principal told them “when their daughter returned to school, school staff would refer to her using whatever name and pronouns she wanted while at school, even over her parents’ objection,” according to a complaint filed by the Wisconsin Institute for Law and Liberty and the Alliance Defending Freedom.

“[Her parents] had no choice but to withdraw her from school, which they did immediately and kept her out of school for a few weeks. And during that time, she changed her mind. She realized her parents were right to take that cautious approach, and that she’d actually been confused,” the Wisconsin Institute for Law and Liberty’s Luke Berg told the DCNF in an interview. The daughter now attends another school district.

The Kettle Moraine School District did not respond to the DCNF’s request for comment.

‘Not Adopted in a Transparent Manner’

The Wisconsin Institute for Law and Liberty is also involved in a lawsuit against the Madison Metropolitan School District over a similar policy, which it filed in February 2020, representing eight families, two of which involve single mothers.

“The district’s policy was not adopted in a transparent manner with a full opportunity for all parents to provide feedback and with a public vote by the School Board,” the complaint said. “Instead, the policy was developed internally within the Madison School District staff working with preferred groups that agreed with the direction being pursued by the staff.”

Berg told the DCNF that one of the preliminary motions in this case has already reached the Wisconsin Supreme Court, which is being asked to decide whether the plaintiffs can remain anonymous. It is also being asked to rule on a preliminary injunction against the Madison Metropolitan School District.

“The trial court said the policy is enjoined to the extent that it requires staff or allows staff to deceive parents or to lie to parents if they ask about what’s happening at school,” Berg explained to the DCNF. “So that injunction is still in place, so parents can affirmatively ask their school district, ‘Hey, what name and pronouns are you calling my child at school?’ and the staff has to answer truthfully.”

Tim LeMonds, the executive director for communications and public affairs for the Madison Metropolitan School District, told the DCNF he was “not able to provide comment on pending litigation.” 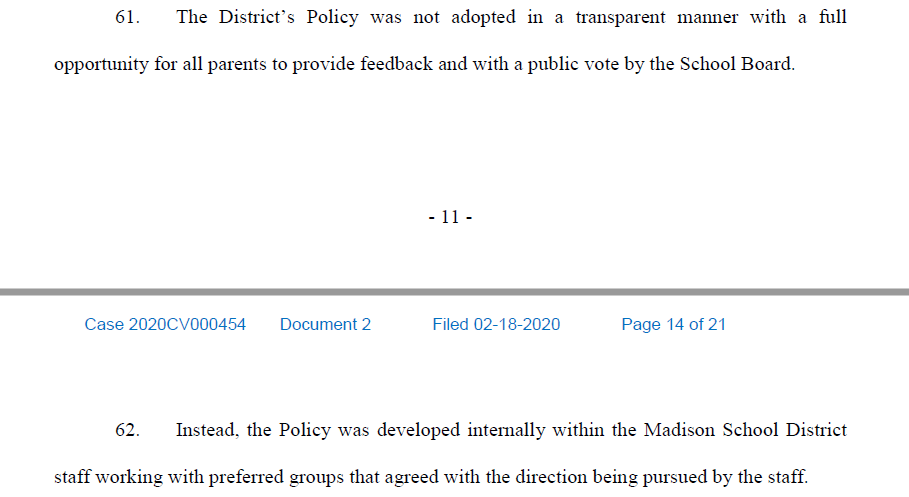 ‘Allowed to Keep Parents Out of Loop’

Cases alleging clandestine transitions are cropping up elsewhere across the country. In Montgomery County, Maryland, parents are suing their school district over a policy like those in Florida and Wisconsin.

“The judge is busy working on his opinion, I suppose, for six months or more now,” Rick Claybrook, an attorney working with the National Legal Foundation on the case, told the DCNF.

Claybrook told the DCNF that the suit, while filed in a Maryland state court, has been moved to a federal court over some of the issues raised.

“We’re not challenging the entire policy, but we’re challenging those parts of the policy that say you are allowed to keep parents out of the loop,” he explained.

A spokesman for Montgomery County Public Schools asked the DCNF for additional details about the litigation, but did not provide comment as of this writing.

Screenshot of the complaint filed in Parents v. Montgomery County Board of Education.

A situation in Ludlow, Massachusetts, shows just how serious some school districts are about keeping information from parents, according to a fired teacher’s lawyer.

Bonnie Manchester, a social studies teacher at Paul R. Baird Middle School, informed the parents of two students who had begun to socially transition at school. Manchester had done so at the request of one of the students, and the parents had been grateful for being told, according to her attorney, Frank McNamara.

However, in an April 16 letter, Principal Stacy Monette informed Manchester of her intent to terminate her employment.

“You shared sensitive confidential information about a student’s expressed gender identity,” Monette wrote, adding, “If you believed that it was necessary to inform the parents, the appropriate means to express your belief would have been through the so-called Mariners team and/or Guidance Counselor.”

“Thanks to the actions of Ms. Manchester, a child’s life may have been saved,” McNamara wrote in a May 17 letter to the district.

Two days later, Monette wrote to Manchester, announcing the decision to fire her.

“I have decided to terminate your employment with the Ludlow Public Schools due to conduct unbecoming of a teacher,” the May 19 termination letter said, going on to claim that by telling the parents, Manchester showed “a complete lack of concern for the student’s well-being.”

“You violated state law and regulations [regarding] student records/privacy as well as the Family Educational Rights and Privacy Act (FERPA) by releasing student information to individuals who did not have the right to view the information,” Monette added.

McNamara told the DCNF he intends to file a civil complaint regarding the termination of Manchester. Lowell Public Schools responded to the DCNF’s request for comment with a terse “No comment.”

The lawyers who filed the lawsuits against the school districts told the DCNF more legal action could be forthcoming.

“We’re speaking for parents around the country,” Broyles told the DCNF. “We’re actively working with parents in another state and considering yet another.”