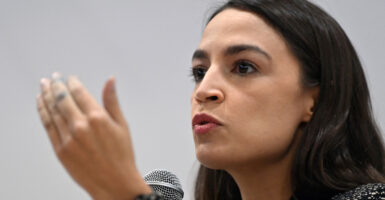 Rep. Alexandria Ocasio-Cortez, D-N.Y.—seen here at an event on the sidelines of the U.N. Climate Change Conference in Glasgow, Scotland, on Nov. 9—unfairly maligned the Supreme Court and Justice Brett Kavanaugh in particular this week. (Photo: Paul Ellis/AFP/Getty Images)

Yet the court, says Ocasio-Cortez, D-N.Y., “is letting him decide on whether to legalize forced birth in the U.S.” Of course, “credibly accused” is not any kind of legal standard—unlike, say, liberal notions about due process and the presumption of innocence.

Indeed, there is nothing for the FBI to investigate, because there are no “corroborated details” that sustain Christine Blasey Ford’s accusations against Kavanaugh. Ford alleged to have “100%” certitude that Kavanaugh had assaulted her in the 1980s, yet she possessed 0% memory of any details that could have substantiated her claim—not even a time nor a place.

Every witness the accuser maintained had been at the suburban Maryland party where the alleged attack occurred has, under threat of felony, denied knowledge of the assault and stated they have no recollection of the get-together. This includes Ford’s then-best friend, Leland Keyser. There is not even a witness who could corroborate that Blasey Ford had ever met Kavanaugh.

In the hierarchy of “rights,” abortion apparently sits above all others. In the mind of Democrats, then, originalist justices who may potentially overturn Roe v. Wade aren’t merely wrong, they’re nefarious extremists, and thus any smear or tactic is justified in the campaign to stop them.

The groundwork for Ocasio-Cortez to delegitimize the court was laid by Democratic senators before Blasey Ford or Julie Swetnick emerged and then-Sen. Kamala Harris was reading wholly unsubstantiated gang-rape charges against Kavanaugh into the Congressional Record.

There were ludicrous hearings about yearbook jokes and drunken parties that were only meant to discredit any future decisions by the court. Then there were the extraconstitutional standards Democrats kept inventing. Any nominee of a president who was even “under suspicion” of criminality—these were the days when Russian collusion was a thing—were “illegitimate.”

Sen. Ed Markey, D-Mass., argued that the nominee was “illegitimate” because the president was “all but named as a co-conspirator.” Ah, the constitutional “all but” standard.

CNN’s lascivious chief legal analyst, Jeffrey Toobin, who has a personal stake in liberal abortion laws, would go on to claim that “40 percent of the Republican appointees to the Supreme Court have been credibly accused of sexual misconduct,” which is a good reminder that Justice Clarence Thomas was also smeared in much the same way. Despite hagiographic accounts of the incident, Anita Hill was not a “credible” accuser either.

To this day, no credible person—and Thomas has had scores of subordinates working for him during his years in government, before and after his confirmation—has corroborated that Thomas had acted in the ways Hill described. And yet, Democrats continue pushing the revisionist histories.

Today, many Democrats demand that President Joe Biden pack the courts and destroy the judicial system, or they threaten justices on the steps of the Supreme Court.

“I want to tell you, [Justice Neil] Gorsuch! I want to tell you, Kavanaugh!” Sen. Chuck Schumer, D-N.Y., said last year. “You have released the whirlwind, and you will pay the price! You won’t know what hit you if you go forward with these awful decisions!”

Whatever does Schumer mean? And what exactly are justices supposed to do? Take orders from backbenchers and hyperventilating pundits on how they should rule?

Even if you believe that the president’s behavior in January 2021 was an attempt “to overthrow the U.S. government,” that has absolutely no bearing on the appointments he made in the years 2017, 2018, and 2020.

Ocasio-Cortez also points out that Donald Trump was “elected via minority,” which is either another extraconstitutional demand or a sign that the congresswoman is simply unaware that presidents have never been elected by the majority, but rather by the Electoral College.

Furthermore, Ocasio-Cortez’s assertion that overturning Roe v. Wade would necessitate “forced birth”—a new talking point among pro-abortion advocates—is both factually wrong and morally repugnant. Increasingly, progressives talk about pregnancy as if it were a gruesome affliction, and unborn children as if they were malignant tumors.

Whatever the case, a world without Roe would merely allow voters to decide when or how lethal force can be used against the unborn—because the issue has nothing to do with the constitutional law.