The Persecution of J.K. Rowling at Hands of ‘Oppressed’ 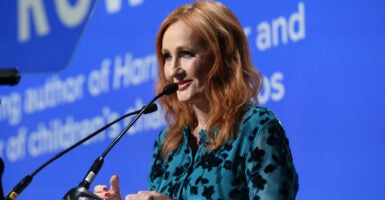 It’s one of the most common words in the leftist vocabulary: “oppressed.” The radical left views all social interactions and structures through the lens of oppressor vs. oppressed. The left’s favorite groups, racial and sexual minorities, find themselves perpetually oppressed and victimized by their straight white oppressors, no party more guilty of this perennial sin than the cis, straight, white male.

This could not be further from the truth. In today’s America, the most “oppressed” groups wield the most social caché. Any comment or perceived slight against them results in loss of livelihood or social pariah status. And in the case of “Harry Potter” author J.K. Rowling, it resulted in threats to her life.

On Nov. 22, Rowling tweeted that her address had been revealed on Twitter by activists intent on exposing her to the public, likely with the intention of putting Rowling’s life in danger.

In the same thread Rowling admitted she’d “now received so many death threats I could paper the house with them,” but that she refused to back down, arguing “the best way to prove your movement isn’t a threat to women, is to stop stalking, harassing and threatening us.”

Rowling first came under fire back in June 2020 for tweeting her concern around terms like “people who menstruate” and the rejection of biological sex in deference to gender identity erased “the lived reality of women globally.”

Initially, the response to Rowling’s tweet was to call her a TERF, short for trans-exclusionary radical feminist, and to try and cancel her like Twitter harpies are wont to do.

Actors from the “Harry Potter” movie series tweeted their Twitter mob mandated support of transgender people and eventually Warner Bros., the studio responsible for making the films, weighed in.

The events in the last several weeks have firmed our resolve as a company to confront difficult societal issues. Warner Bros.’ position on inclusiveness is well established, and fostering a diverse and inclusive culture has never been more important to our company and to our audiences around the world. We deeply value the work of our storytellers who give so much of themselves in sharing their creations with us all. We recognize our responsibility to foster empathy and advocate understanding of all communities and all people, particularly those we work with and those we reach through our content.

Rowling is, obviously, correct in asserting that the trans obsession with violently threatening dissenters is an awful way to draw in people. But it also belays an obvious reality.

If you are transgender, especially a biological man pretending to be a woman, you will have the full backing of the media, corporate America, academia, the political class, and the vicious, violent Twitter mob.

How could anyone with the backing of every major facet of American life be considered oppressed? Criticism of transgenderism, no matter how benign, is immediately met with fierce pushback and deplatforming.

Rowling’s tale proves the victimhood of the left’s favorite groups is a lie. That is not to say historically minorities have not been oppressed in America. Slavery is a stain on the fabric of American history, and hate crimes against sexual minorities do happen.

But the word “oppression,” normally paired with a word like “systemic” or “societal,” implies wide-reaching and deep-rooted discrimination. The left would have you think black people are being regularly shot in the streets by whites with impunity, and that transgender people are treated like lepers—friendless and alone.

Consider then Rowling’s absence at the “Harry Potter” film series’ 20th anniversary celebrations. The power of the victim class is so great, it was successfully able to get an author canceled from a celebration of her own magnum opus.

This adulation of the so-called oppressed is pure and simply unsustainable. Western, democratic society cannot exist when the sole determinant of whether one is allowed to express one’s views is reliant on one’s racial or sexual characteristics.

The idea of the oppressed class is a dangerous lie. Best show it the Gryffin-door.