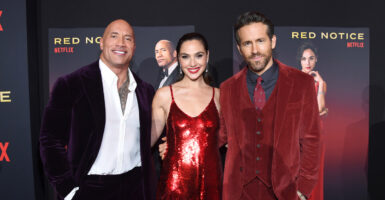 Interpol is enjoying new fame thanks to the movie “Red Notice,” but where's The Rock when we need him in real life? Pictured from left: Co-stars Dwayne (The Rock) Johnson, Gal Gadot, and Ryan Reynolds attend the Nov. 3 world premiere of Netflix's "Red Notice" in Los Angeles. (Photo: Kevin Mazur/Getty Images for Netflix)

Of course, the International Criminal Police Organization is nothing like Hollywood depicts it. Interpol doesn’t chase criminals. In reality, it’s more like an electronic bulletin board on which police agencies around the world can post wanted notices.

But being on that bulletin board could get you in a lot of trouble. You could be arrested. Your bank account could be closed. And at worst, you could be extradited to stand trial abroad.

Lots of the red notices on Interpol’s bulletin board are legitimate. But quite a few are not.

Around the world, dictatorships and autocracies—almost all of them members of Interpol—have realized that these red notices are a good way to harass their enemies. That kind of harassment is an abuse of Interpol’s rules.

For the past several years, the autocracies have pushed to take control of Interpol’s leadership, which is elected by the Interpol General Assembly.

In 2016, the General Assembly elected a leader of China’s political police to head Interpol. In 2018, a stooge of Russian President Vladimir Putin came close to winning Interpol’s presidency.

The General Assembly last week held its latest round of elections, and the results were just about as bad as they could have been.

Interpol’s member nations elected Ahmed Nasser Al-Raisi, inspector general of the United Arab Emirates’ Interior Ministry, as the police organization’s new president. Al-Raisi has been credibly accused of torture, while the UAE is a known abuser, and growing funder, of Interpol.

A better choice was available in a veteran police official from the Czech Republic. But by taking almost 70% of the final vote, Al-Raisi won relatively easily.

The presidency of Interpol is important, but Interpol is more directly overseen by a 13-member Executive Committee that includes the president. The Interpol General Assembly also elected 11 other new committee members.

Of these 11 members, only three—from the United States, Spain, and the United Kingdom—are from democracies with a good record in Interpol. Two more, from Brazil and Argentina, are from weaker democracies.

Three more are from Nigeria, Kenya, and India, all democracies with pervasive corruption and bad Interpol records. The remainder of the committee members are from the autocracies of Turkey, China, and Sudan; Turkey and China have among the worst Interpol records in the world.

At best, abusive or autocratic states–UAE, Nigeria, Kenya, India, Turkey, China, and Sudan–hold a narrow majority on the committee. At worst, the U.S., Spain, the U.K., and the Czech Republic (which has the only holdover seat) might well be outvoted 2-to-1.

And the news could get even worse. The Interpol General Assembly also elected seven new members of its appellate body, the Commission for the Control of Interpol’s Files.

The results aren’t available yet. But if the autocracies take over the commission, the democracies will have completely lost control of Interpol.

This would be a bad outcome for a few reasons. First, unlike some other international organizations, Interpol does real work. It actually matters.

Second, it was no secret that the UAE, China, and Turkey were making a play to lead Interpol. At The Heritage Foundation, we’ve been warning about this for years.

Third, many Interpol member nations voted for these bad candidates. And if they voted for abusers, there’s no reason to believe they won’t abuse the system themselves or that they will support reforms needed to stop abuse.

This was a great opportunity for U.S. leadership. America pays a greater share of Interpol’s budget than any other nation, and wants nothing more than for Interpol to follow its own rules.

The danger of an autocratic takeover was clear. The elections came as no surprise.

And yet the autocracies won. As a result, Americans can expect Interpol to be in the news a lot more over the next four years. But it’ll be real bad guys—not Hollywood’s Johnson, Gadot, and Reynolds—who will be in the starring roles.