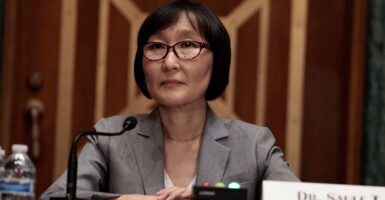 Dr. Saule Omarova listens during her nomination hearing to be the Comptroller of the Currency with the Senate Banking, Housing and Urban Affairs Committee on Capitol Hill on Nov. 18, 2021. (Photo: Anna Moneymaker/Getty Images)

It is ironic when Democrats complain about sensational use of language.

Thanks to progressives, practically every white person in America has been labelled a racist.

But now Democrats are screaming because Republican Sen. John Kennedy suggested that Saule Omarova, whom President Joe Biden has nominated to head the Office of the Comptroller of the Currency—the nation’s top banking regulator—might be a communist.

Kennedy opened his questioning of Omarova at her Senate Committee on Banking, Housing and Urban Affairs confirmation hearing asking if he should call her “professor or comrade.”

>>> RELATED: ‘I’m Not a Communist’: 6 Takeaways From Saule Omarova Hearing

Distinct from the labels and charges we regularly hear from progressives, there is substance to the senator’s suggestion about Omarova’s proclivities.

No, it’s not that she was born in Soviet-controlled Kazakhstan, or that her degree is from Moscow State University, or even that her doctoral thesis is entitled “Karl Marx’s Economic Analysis and the Theory of Revolution in the Capital.”

It is about how she views the world.

This is someone who will oversee our nation’s banking system that wants to “end banking as we know it” and transfer vast parts of it to government control.

Maybe we must read Omarova’s doctoral dissertation to get a handle on the fine points of what we call communism.

But if turning our financial services system over to government control is not communism, suffice it to say it certainly is not what America is supposed to be about.

She proposes that the Federal Reserve, the least accountable entity in the federal government, take over a vast swath of private banking functions, with private banking accounts being replaced by accounts run by the Fed.

If there is a microsecond where you might think this is a good idea, look at what’s happening now to prices at the gas pump and at the supermarket, where we see inflation at a 30-year high. Consider where this is coming from.

Yes, the Federal Reserve. Journals and newspapers burst with warnings from private economists over recent years that Federal Reserve monetary policy will lead to inflation, and Fed Chairman Jerome Powell has been poo-pooing these warnings.

Now it’s happening. And this is who professor/comrade Omarova thinks should be taking over the full scope of our financial lives.

If you think turning over your financial security to the wise stewardship of the Federal Reserve is a good idea, consider that the Federal Reserve was created in 1913 with motivations not that different from those of Omarova. The whole idea then was that giving a government entity control over our monetary system would bring stability.

Under this great government stabilizing influence, we have been through the Great Depression of the 1930s, double-digit inflation and interest rates in the 1970s, and, most recently, a severe financial meltdown in 2008.

Since the Fed’s creation in 1913, per economist and blogger Mark Perry, the consumer price index has increased by “27.25 times which has caused the U.S. dollar to lose 96.3% of its value/purchasing power.” The 1913 dollar is today worth 3.67 cents.

There are notable other areas where Omarova wants much more government power, such as giving government planners vastly more power over climate control policy—to the extent of intentionally driving small oil and gas businesses to bankruptcy.

Maybe why so many Democrats, including our president, take offense at Kennedy’s communist labeling is because they take his accusations personally.

The Wall Street Journal calls the Build Back Better multitrillion dollar spending frenzy, just passed in the House, “the biggest expansion of the entitlement state since the 1960s, and maybe ever.”

We have two competing views in America today. One sees private property, individual freedom and personal responsibility as the answer to our problems. The other sees it as the source of our problems.

The first view I call American. The second—well, if not communist, certainly it is not American.

Please, Senators, do not confirm Saule Omarova to oversee our nation’s banking system.