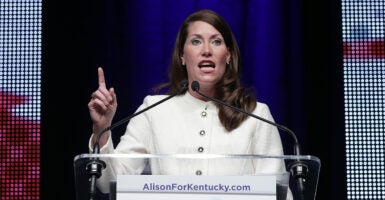 Gerald “Jerry” Lundergan, a former Kentucky state representative and chairman of the Kentucky Democratic Party, has been convicted of violating federal campaign finance laws, and must report to prison on Nov. 30.

Lundergan conspired to illegally contribute funds from one of his companies to the 2014 Senate campaign of his daughter, Alison Lundergan Grimes. Now, questions remain as to Grimes’ own possible violation of campaign ethics law, and the people of Kentucky deserve prompt answers.

The Ethics Commission of Kentucky’s executive branch has voted unanimously to initiate a formal complaint against Grimes for her alleged unethical conduct for using voter registration records for private (political) purposes while she was secretary of state.

Lundergan, along with political consultant Dale Emmons, was convicted of conspiring to illegally contribute more than $200,000 from one of his companies to his daughter’s senate campaign, which she lost to Sen. Mitch McConnell, R-Ky. After the defeat, Grimes continued to serve as Kentucky’s secretary of state.

Although Grimes herself was never charged in this scheme, according to the 6th U.S. Circuit Court of Appeals, her father “was heavily involved in the day-to-day operations of the campaign—namely fundraising, expenses, and strategy … Lundergan negotiated with vendors, hired campaign staff, and reviewed and approved vendor invoices and campaign advertisements.”

Despite her father’s close involvement in the campaign, Grimes claims she had no knowledge of the “day-to-day operations of her campaign” and the illegal corporate financing by her father and a political consultant who was “a friend of the Lundergan family.”

However, Grimes—as well as her assistant secretary of state, Erica Galyon—did indeed have knowledge of the unethical “day-to-day operations” of her office, according to the complaint filed against her by the ethics commission. What the commission complaint does not address is that if the allegations are correct, then Grimes may have also violated numerous federal and state laws.

The ethics commission found “probable cause” that Grimes directed “her subordinates to use state time and resources to download” voter information from the state’s voter registration system onto flash drives, which were given to an “independent contractor of her agency to create lists of newly registered democratic voters.” She then “directed a subordinate employee to email the lists to democratic candidates.”

In other words, she used her office, government employees, and government resources to act as a political consultant for the Democratic Party and its candidates in Kentucky, providing them with the type of valuable voter information and lists that, as the complaint says, “by statute and regulation, candidates must pay a fee to receive.”

This violated numerous provisions of the Kentucky ethics code for members of the executive branch of state government, which is enshrined in state law. These provisions prohibit a state official such as Grimes from using her official position to “further her professional or private interest.”

Much of this came to light when the Lexington Herald-Leader started doing an investigation into complaints against Grimes by her own staff and state employees over her misbehavior. That investigation revealed that she was also using the state’s database to conduct “extensive” searches that “targeted prominent state politicians, including the gubernatorial candidate Rocky Adkins, who could have been Grime’s opponent in the Democratic primary.”

Apparently, when this scandal broke, Grimes decided not to run for governor.

What is particularly ironic about this is that when the Presidential Advisory Commission on Election Integrity was formed in 2017 by President Donald Trump, of which I was a member, Grimes publicly announced her opposition to providing the commission with any voter registration information: “Not on my watch are we going to be releasing sensitive information that relates to the privacy of individuals.”

Apparently, she did not have the same hesitation in using that private information for her own benefit and the benefit of other Democrats in the state.

Formal ethics charges were also filed against Galyon, Grimes’ top deputy, over the apparent attempt to cover up what Grimes is alleged to have done. Galyon is charged with directing the staff of the state board of elections to provide “documents to the personal legal counsel of” Grimes in response to an open records request, while refusing to give the very same documents to a member of the media in response to another open records request.

Not only that, but when documents were eventually provided to the media, they were “altered by adding page numbers and watermarks, while copies to Grimes’ personal counsel were not.” She is charged with violating an ethics provision that prohibits a public servant from using her official position for personal advantage to the “derogation of the public interest at large.”

Questions that remain unanswered include to what extent, if any, Grimes used information from Kentucky’s voter database to benefit her own U.S. Senate campaign in 2014. She was the secretary of state at the time and had access to all of the voter information she is alleged to have provided to Democratic candidates in violation of Kentucky’s ethics law. If these allegations are true, it is hard to imagine that she did not access this same information in 2014 to benefit her own campaign for Senate.

If so, she likely violated the same law her father did by providing an illegal in-kind contribution to a federal campaign. And it would be interesting to know if the Democratic candidates who received this data were aware that, in order to comply with the state’s ethics laws, they had to pay for that information.

Moreover, the inspector general of the U.S. Election Assistance Commission and the Department of Justice might want to look to see if Grimes misused federal funds for her own benefit and that of other Democratic candidates.

This might be the case if the state voter database that she misused, or the contractor who organized the information, or the salaries of her subordinates involved in this were paid with federal funds that her office received from the U.S. Election Assistance Commission through the Help America Vote Act and subsequent federal appropriations.

Like all accused defendants, Grimes is entitled to a presumption of innocence. But like the charges that were levelled and proven against her father, the ethics charges against Grimes are very serious, involving a complete misuse of voter information for private, political gain. And her actions raise serious questions about possible violations of federal law.

Assuming the charges are true, then she betrayed the trust that the voters of Kentucky placed in her when they elected her to public office and abused her official position to benefit her political party and herself.