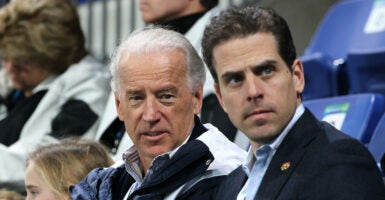 Hunter Biden's role in a Chinese company’s purchase of a cobalt mine shows the need for a special counsel to probe his business dealings, one House Republican says. Pictured: Joe Biden, vice president at the time, attends a U.S.-China women's ice hockey game on Feb. 14, 2010, with his son Hunter at UBC Thunderbird Arena in Vancouver, Canada. (Photo: Bruce Bennett/Getty Images)

Cobalt, a relatively rare and expensive mineral, is an essential part of batteries used to power electric automobiles. The COVID-19 pandemic also made U.S. officials and the public much more aware of Communist China’s control of the supply chain for drugs and other products.

The younger Biden, 51, is a one-time partner in China-based Bohai Harvest RST, known as BHR, and reportedly remains a stakeholder.

The New York Times first reported over the weekend that BHR facilitated mining company China Molybdenum’s $2.65 billion purchase of a cobalt and copper mine from an American company, Freeport-McMoRan.

Rep. Ken Buck, R-Colo., during an October hearing by the House Judiciary Committee, asked Attorney General Merrick Garland to appoint a special prosecutor to investigate Hunter Biden’s business deals. Garland replied that he would take it “under advisement.”

“I have called for Attorney General Garland to appoint a special counsel to investigate Hunter Biden’s corrupt business dealings. This new report shows exactly why it’s necessary,” Buck told The Daily Signal in a statement Tuesday.

The new revelation only adds to existing concern about the younger Biden’s use of his father’s position, first as vice president and then as president, a spokeswoman for the GOP committee members said.

The latest news [that] he assisted a Chinese company purchase one of the largest cobalt mines is another example of Hunter Biden using his influence to line his pockets and help a foreign adversary. Conducting oversight of Hunter Biden’s questionable ethics and dealings that undermine our national security will continue to be a top priority for Oversight [Committee] Republicans.

Hunter Biden’s international business interests long have been a publicity headache for his father, dating to some of the elder Biden’s 36 years in the U.S. Senate and his eight years as vice president.

Republicans are in the minority in both houses of Congress and do not have subpoena power. However, GOP members regularly write letters of inquiry to the White House and federal agencies.

The White House did not respond to The Daily Signal’s inquiry Tuesday for this story.

The New York Times reported that a White House spokesman answered “No” when asked whether the president was aware of his son’s connection to the sale of the cobalt mine.

Hunter Biden and two other Americans served on BHR’s board and controlled 30% of the private equity firm. Chinese investors, including the Bank of China, controlled the rest.

On Dec. 4, 2013, Hunter Biden flew on Air Force Two to China with his father, then vice president. The elder Biden met with Chinese President Xi Jinping. The younger Biden met with his BHR business partner, Jonathan Li, and arranged a meeting between Li and his father.

BHR bought $1.14 billion of shares from Canada-based Lundin Mining Corp., which owned a portion of the cobalt mine in Congo. China Molybdenum bought BHR’s shares of the mine two years later, the Times reported.

As a result, China now owns 80% of the cobalt mine and Congo’s state mining enterprise owns the rest. When BHR sold its share in 2019, Hunter Biden controlled 10% of BHR through Washington, D.C.-based Skaneateles LLC.

Hunter Biden’s lawyer, Chris Clark, did not respond to an inquiry from The Daily Signal. Clark told the Times that his client “no longer holds any interest, directly or indirectly, in either BHR or Skaneateles.”

However, Fox News reported in April that business records show the president’s son continued to own a 10% stake in BHR.