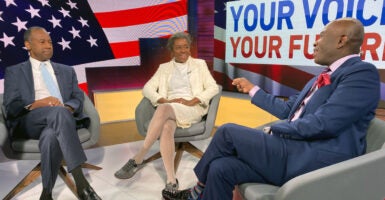 "It's time to stop worshiping the brick [school] building and give the money to parents for the child," says Virginia Lt. Gov.-elect Winsome Sears, a Republican who will take office Jan. 15. (Photo: Rob Bluey/The Daily Signal)

Winsome Sears made education a centerpiece of her successful campaign for lieutenant governor in Virginia. Now, as she prepares to take office, the mother and Marine Corps veteran is promising to challenge the status quo and advocate for parents and children.

“Education lifted me out of poverty and education will lift everybody,” Sears, a Republican, said Monday during an interview with TV host and commentator Armstrong Williams.

Citing what she called a “horrendous” situation in public schools, Sears promised to fight for parents to take control of their children’s education and hold schools accountable.

“Imagine if you were to tell a parent that your child, when it comes to college, could only attend the college closest to their ZIP code. No, it wouldn’t stand,” Sears said during the interview on Williams’ show on WJLA-TV, the ABC affiliate in Washington, D.C. “It is time for us to give parents the opportunity to choose whatever school they want their child to attend.”

Sears recounted her own family’s challenges and the sacrifices she made to attend college as a mother of three children under age 5.

Sears, born in Kingston, Jamaica, was 6 when her parents brought her to America as legal immigrants.

“Was it easy? No. Nothing I’ve had has ever been given to me. I’ve had to work for it,” she said.

Education dominated as an issue in Virginia’s recent election, fueled by parental concern over COVID-19-related school closures, mask mandates for young children, and curriculum concerns. In populous and wealthy Loudoun County, the school board clashed with parents over transgender ideology and critical race theory.

Sears, along with Gov.-elect Glenn Youngkin, seized on the education issue and made it a winner for Republicans statewide. It helped that Democrat Terry McAuliffe, a former governor, told voters during a Sept. 29 debate: “I don’t think parents should be telling schools what they should teach.”

Sears, in addition to serving a term in the Virginia House of Delegates, is a former member of the Virginia Board of Education.

“You can take anybody, from any environment, [and] if you give them a good education, they write their own ticket in this society,” Carson said. “There seems to be more of an emphasis by many on victimhood … rather than on what you can do. Our country is a place of enormous opportunities.”

Carson said some Americans appear to have forgotten about the purpose of education and how it made the United States the best nation in the world from the time of the founding.

Sears, who will take office Jan. 15, will serve in an important role as the tie-breaking vote in a closely divided Virginia Senate, where Democrats hold a 21-19 majority. She promised to represent the interests of all voters as a solutions-oriented lieutenant governor on education as well as other issues.

“It’s time to stop worshiping the brick [school] building and give the money to parents for the child, so the child can have a chance at life, a chance for a hope and a future instead of continuing to throw money at a problem,” Sears said. “Something has to change and somebody has to care.”