Why No Media ‘Reckoning’ Over Phony Steele Dossier? 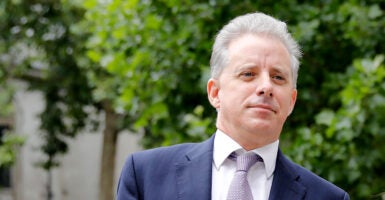 Former British intelligence officer Christopher Steele—seen here arriving at the High Court in London on July 24, 2020, for his defamation trial brought by Russian tech entrepreneur Alexej Gubarev—was the author of a dossier at the heart of false allegations of Russian meddling in the 2016 U.S. presidential election. (Photo: Tolga Akmen/AFP/Getty Images)

Axios says there’s a “reckoning” in the media over coverage of the Steele dossier after the partisan oppo document’s primary source was charged with lying to the FBI.

“It’s one of the most egregious journalistic errors in modern history,” writes Sara Fischer, “and the media’s response to its own mistakes has so far been tepid.”

Tepid is a nice way of putting it.

While The Washington Post “corrected” some of its discredited reporting on the dossier, removing portions of reporting connecting former President Donald Trump to Russia, there has been virtually no other accountability. And, really, it’s become modus operandi for the news organizations to “correct” stories in which the entire premise is false.

Any sort of “reckoning” would mean a retraction, followed by investigative deep dives, not only reporting the problems with the story themselves, but also outing the fraudulent sources who participated in the deception.

Perhaps that’s going on as we speak, but it’s highly doubtful.

Those who perpetuated the Russia collusion deception—and this means editors and pundits, not only reporters—still hold premier jobs in political media. Many, in fact, have been rewarded with better gigs.

Is anyone at The Washington Post or The New York Times going to return a Pulitzer? Is anyone going to explain how multiple alleged independent sources regularly buttressed the central fabulistic claim of the dossier?

Journalism is ostensibly about transparency and truth, yet not one of these sentinels of democracy has explained how they were supposedly fooled for years, exhibiting not a modicum of skepticism—one of the most vital components of good journalism.

When asked by Axios about the Steele dossier, the two outlets that churned out some of the most sensationalistic and conspiratorial content of the Trump era, CNN and MSNBC, wouldn’t even comment.

There’s the argument out there that contends that Trump and his associates did and said things that made the dossier’s claims plausible. Well, Trump’s words could have been a big enough story on their own. The president made no secret of his personal admiration of Russian President Vladimir Putin before the election. The notion that a Russian asset (since 1987, even!) would need to go on TV and ask the Russians to ferret out Hillary Clinton’s lost emails seems a stretch.

To excuse what came next from the media would be tantamount to excusing widespread coverage of birtherism simply because so many of former President Barack Obama’s abuses of executive power or inability to say America was exceptional was antithetical to the Constitution he swore to protect.

The press exists to avoid the proliferation of faulty information and conspiracies, not to perpetuate them because of their partisan assumptions. Would BuzzFeed editor Ben Smith, now media reporter for The New York Times, have published an uncorroborated “dossier” on birtherism or, for that matter, President Joe Biden’s dealing with his corrupt son, giving it undue attention and credibility?

The media and tech companies wouldn’t even allow a properly sourced New York Post story about Hunter Biden be shared in the run-up to the election. Just more proof of malfeasance, not sloppiness. The chances of every single alleged mistake skewed in the same direction is, of course, infinitesimally small.

What difference, at this point, does it make? Well, for one thing, the full truth is opaque, and the historical record has yet to be corrected. It still says that “Russia Secretly Offered Afghan Militants Bounties to Kill U.S. Troops,” a story that spawned from the environment created by the Steele dossier, on The New York Times website.

That piece, like so many others, is incorrect. The “intelligence officials” who spread that story were running what amounted to a shadow government using a partisan concoction, illegal Foreign Intelligence Surveillance Act requests, and a pliant media to sink the foreign policy of the elected president.

It’s one of the least democratic things I can think of. It’s worth knowing how it happened—yet the public gets no explanation.