COVID-19 Protests in New Zealand Are All About Economic Freedom 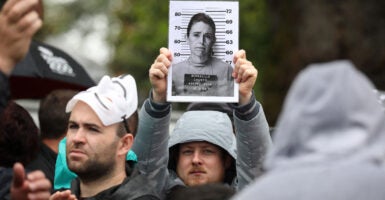 An activist displays a mock-up of a criminal mugshot of New Zealand Prime Minister Jacinda Ardern during a Nov. 13 protest march in Christchurch, New Zealand, by the Freedom and Rights Coalition, demanding an end to COVID-19 restrictions and mandatory vaccinations. (Photo: Sanka Vidanagama/ AFP/Getty Images)

New Zealand was one of only five economically free countries in the world, as measured by The Heritage Foundation’s 2021 Index of Economic Freedom.

For years, the people of New Zealand have enjoyed robust rule of law, clear regulatory efficiency, and free and open markets. The size of the government has been relatively small, which is a boon to economic freedom.

Recently, though, the government of New Zealand has disregarded people’s economic freedom in an attempt to eradicate all traces of COVID-19 from the southwest Pacific Ocean island nation.

Since the COVID-19 pandemic started in early 2020, the left-leaning government of New Zealand Prime Minister Jacinda Ardern’s restrictive pandemic response policies have destroyed the livelihoods of service professionals, retailers, and small-business people, among others.

Many of those people don’t agree that they should bear such high costs related to the government’s fight against COVID-19—and understandably so.

Kiwis have been ordered to stay in their homes for long stretches of time during the pandemic. Most recently, this applied to nearly 1.7 million people in Auckland from mid-August to early October. People subject to the lockdowns have not been allowed to meet with family members who do not live with them—or even to meet with them outdoors or go to beaches or parks.

Businesses have been forced to permanently shut down. One small-business owner in South Canterbury, New Zealand, told the Timaru Herald:

We can’t get through another year. This year has been really bad, and another school holidays have just been and gone.

We had five staff, and we had to let them all go. It’s heartbreaking. …

There are a lot of places in Twizel that have closed down, a lot in Tekapo that have been mothballed or gone under.

In October, the government of New Zealand finally gave up on the policy it had since the pandemic began of seeking to eliminate every case of COVID-19 in the entire country. But severe restrictions remain in place and are decimating businesses, including the once-booming tourism industry.

Many in New Zealand are protesting in the streets because of the lingering restrictions.

Reuters reported from Wellington on Nov. 9:

New Zealand beefed up security measures at its parliament on Tuesday as thousands of people gathered to protest against COVID-19 vaccine mandates and government lockdowns aimed at controlling the pandemic.

All but two entrances to the parliament building, known as the Beehive, were closed off in unprecedented security measures, as mostly unmasked protesters marched through central Wellington and congregated outside parliament.

While the demonstration was peaceful, many people were seen holding signs and placards with messages like ‘Freedom’ and ‘Kiwis are not lab rats’ and shouting slogans as they demanded the government roll back compulsory vaccination and lift restrictions.

The response to the coronavirus pandemic by New Zealand’s government, which has been so devastating to small businesses, has not eradicated all COVID-19.

The economic costs to individuals and their families due to the response should not be ignored or assumed to be “worth it.”

New Zealand’s continued status as one of only a very few economically free countries in the world now depends on Kiwis successfully exercising their democratic authority over their government and its officials. The return of New Zealand as the land of high economic freedom is much needed.