Destroying the Altar of ‘Woke’

San Francisco Archbishop to Pelosi: Do Not Receive Communion 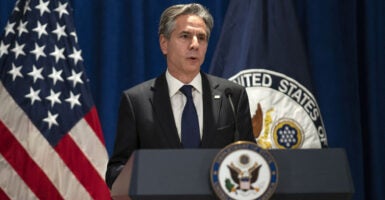 Secretary of State Antony Blinken, pictured, reinstated an Obama-era addition to the State Department's 2020 human rights report—reporting on foreign countries’ laws and programs regarding abortion and contraception. The addendum features subsections on “reproductive rights” in the evaluations of every member country of the United Nations. (Photo: Eduardo Munoz/AFP/Getty Images)

Earlier this month, the U.S. State Department made a minor change to its annual Country Reports on Human Rights Practices.

Although the media largely ignored the move, the change adds to the ongoing shift in U.S. human rights advocacy taking place during the Biden administration. Its consequences could be far-reaching.

Secretary of State Antony Blinken reinstated an Obama-era addition to the State Department human rights report—reporting on foreign countries’ laws and programs regarding abortion and contraception. The new addendum to the 2020 report released in March now features subsections on “reproductive rights” in the individual evaluations of every member country of the United Nations.

The term “reproductive rights” is code for abortion, and its use in official U.S. human rights reports is inappropriate. A “right” to abortion is nowhere to be found in international human rights law; meanwhile, the right to life certainly is.

Now, American allies like Poland—known for being a great protector of human rights and champion of freedom—will receive a slap on the wrist at the hands of the State Department’s report for having pro-life protections.

This is occurring even as authoritarian regimes like North Korea and China continue conducting forced abortions on vulnerable women, constituting a grave human rights abuse.

You might be thinking: How much harm can an annual State Department report that most Americans don’t even know about really do? As it turns out, a lot.

When announcing the reporting change, State Department spokesperson Ned Price told reporters, “We reaffirm our full commitment to promote and protect the sexual and reproductive health of all individuals, recognizing the essential and transformative role they play in gender equality and women and girls’ empowerment around the world.”

This is a false and damaging narrative for women. Instead of leveling the playing field, legalized abortion pressures women into viewing their children as enemies of their success. Abortion is not necessary to ensure equality—having equal protections and rights under the law are.

Rather than monitoring (and by doing so, implicitly promoting) access to abortion around the world, the State Department should re-focus its efforts on addressing the truly pressing human rights abuses that are unique to women and girls.

Currently, the forced marriages of young women from religious minority communities are all too common in Pakistan. Uyghur women in Xinjiang are being forcibly sterilized and undergoing devastating forced abortions. And Afghan girls are being sold by starving parents and barred from going to school.

These are some of the serious human rights crises that women and girls are facing around the world today, and the State Department should be paying closer attention and taking action.

On his popular daily podcast, Albert Mohler, president of The Southern Baptist Theological Seminary, criticized the State Department’s inclusion of “reproductive rights” in its reports, saying, “It is a morally grotesque corruption of the idea of human rights … And it’s unhinged from any kind of understanding of the origin of rights coming from outside human beings ourselves.”

By their very nature, human rights preexist the state. They are not granted by governments; governments merely choose whether or not they will respect them.

This preexistence is why diverse governments representing vastly different cultures can agree to the United Nation’s Universal Declaration of Human Rights. It is also why the United States and other free countries can confidently advocate for human rights around the world.

It’s not an imposition on cultural differences to stand up for human rights. Rather, it’s an acknowledgment of the human dignity of each person. We advocate for human rights around the world because we aim to protect rights that every person already has by virtue of their humanity.

The rights recognized by the Universal Declaration of Human Rights include freedom of thought, conscience, and religion; freedom of opinion and expression; and the right to life, liberty, and security of person.

The “right” to end the life of a preborn child through abortion clearly doesn’t belong in this list. The profound importance of human rights makes the promotion of new rights invented by activists or politicians inappropriate and damaging.

The United States must preserve the integrity of human rights advocacy in its annual reports and all other aspects of its foreign policy. We can start by making sure the State Department’s annual reports monitor what they purport to monitor—human rights.