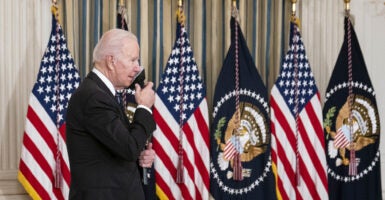 Not enough attention is being given to the harmful effect the Build Back Better plan would have on Social Security. Pictured: President Joe Biden prepares to deliver remarks at the White House on Nov. 5. (Photo: Sarah Silbiger/Getty Images)

With trillions of dollars in new government spending aimed at children, families, and green energy, there hasn’t been much mention of how the Build Back Better bill—which was passed by the House of Representatives on Friday—would impact older Americans. But its impact on the labor market could cost Social Security recipients $750 per year in lost benefits.

Social Security has $19.8 trillion in unfunded liabilities—the equivalent of $154,000 for every household in America—and is on track to run out of funds to pay promised benefits beginning in 2034. At that point, every single Social Security recipient would be faced with roughly 22% benefit cuts.

President Joe Biden’s tax-and-spend legislation contains many policies that would make it harder to confront Social Security’s shortfalls—most notably because it would raise future deficits and debt. But it also creates welfare-without-work policies and adds government interventions that micromanage businesses, which could significantly reduce employment in the long term.

For example, researchers at the University of Chicago estimated that making the proposed $250 or $300 monthly child payments permanent would reduce the employment of parents by 2.6%, which equals approximately 1.5 million workers.

Since every dollar that older Americans and individuals with disabilities receive in Social Security benefits comes directly from the paychecks of current workers, fewer workers would mean fewer contributions and a quicker depletion of Social Security’s trust fund.

Two recent studies estimated that in total, the massive tax-and-spend package would result in job losses of 5.3 million and 8.7 million.

With assumptions on the lower-end of that range—a 6.2 million decline in full-time employment—The Heritage Foundation’s Social Security model projects a loss of $25 billion in payroll tax revenues in 2022, and $289 billion in lost revenues between 2022 and 2031.

With benefits limited to incoming revenues after insolvency, fewer workers would translate into larger benefit cuts. We estimate that cuts to the combined Social Security and disability insurance programs would need to be 26% instead of 22%, as currently projected. That increase would mean $750 less per year in Social Security benefits for the average retiree.

To strengthen Social Security, policymakers should shift toward a better targeted program that would help raise more people out of poverty while also allowing individuals to keep more of their earnings. That includes shifting to a universal anti-poverty benefit, using a more accurate inflation index, modernizing the program, and giving workers an ownership option.

According to The Heritage Foundation’s Social Security model, these changes would not only solve Social Security’s shortfalls, they would also allow a roughly 25% reduction in Social Security’s tax rate, allowing all Americans to keep more of their earnings to save and spend as they see fit for them and their families.