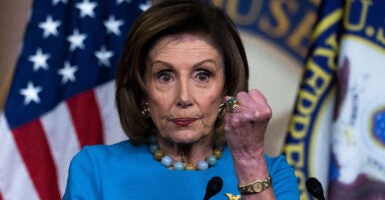 The House on Friday passed a profoundly radical, multitrillion-dollar tax-and-spend package, with all but one Democrat in favor and all Republicans opposed.

Though the bill has been given the innocuous-sounding name “Build Back Better,” it would cause tremendous long-term damage to our way of life.

More immediately, it would pose a grave threat to our economic recovery by worsening price inflation.

Since the start of the coronavirus pandemic, the federal government has flooded the economy with more than $5 trillion in deficit spending. Much of the spending has been wasted or used to benefit politically connected special interests.

All that deficit spending has been a factor in America’s most significant bout of inflation in decades, and families are feeling the adverse effects.

A Pew Research poll shows that 93% of Americans are concerned or very concerned about inflation, and in an Associated Press poll, 65% say that the economy is in poor shape.

Rather than heeding the warning of the raging inflationary fire and backing away from the reckless spending plan, the administration has rolled out a series of flawed talking points in an effort to prop up President Joe Biden’s dismal approval ratings.

It’s important to understand exactly why these points are so off-base.

Claim: “We must pass the Build Back Better Act to lower costs for working families … .”

Response: When most people think about “lower costs,” they imagine the price of something going down. When the Biden administration says “lower costs,” it means the federal government subsidizing a few politically favored causes.

In the real world, more federal intervention would backfire in several ways.

The bottom line is that federal meddling would increase prices, not lower them.

Claim: “[I]t’s not going to cost anything for the American taxpayer.”

Response: The Biden administration has been serving up this whopper for months.

For starters, the bill would slap heavy taxes on businesses and investors and would hire an army of IRS agents to shake America down even harder.

In addition, the idea that trillions of dollars in spending and tax credits have “zero cost” is patently absurd. We all know that every penny the federal government spends has to come from somewhere.

If it’s taxed, money is taken out of the economy. If it’s borrowed, money comes from future taxpayers, many of whom aren’t even old enough to vote yet. Borrowing also crowds out private investment.

If it’s just printed, that dilutes the value of the money in our paychecks and bank accounts.

The fact that the administration keeps using such an obviously false talking point suggests that it can’t come up with proper defenses for its radical agenda.

Claim: “[T]his bill is fully paid for. It’s not going to add to inflationary pressures—quite the opposite.”

There are three big problems with what he said.

First, the nonpartisan Congressional Budget Office has said that the bill is not fully paid for. Including interest costs, it would add hundreds of billions of dollars to the national debt.

Second, the bill is heavily gimmicked by having major programs arbitrarily expire in the first few years. As such, the true cost of the bill is more than double what Democrats claim.

Third, because the spending is front-loaded while the taxes are spread across 10 years, it’s guaranteed to create fresh deficit spending the moment it’s signed into law. In turn, the additional deficit spending would put more upward pressure on prices just when families can least afford it.

Concerns about what the social spending bill would do to inflation aren’t limited to conservatives. Steven Rattner, a top economic adviser during the Obama administration, wrote a piece this week in The New York Times, arguing that Democrats should take inflation more seriously.

Response: This, and a related claim that Nobel Prize-winning economists think the bill would reduce inflation, stem from an open letter published in September at the left-leaning Economic Policy Institute.

Specifically, the letter claims that an earlier version of the legislation would “ease longer-term inflationary pressures.”

Setting aside the merits of the claim, these economists aren’t saying that the bill would address the inflation that Americans are actually dealing with right now.

As such, the administration’s repeated (and often obscured) references to the letter in the context of inflation are an attempt to confuse the public about what the letter actually says.

Legislators ought to have enough common sense and economic understanding to see through these transparent talking points.

The “Build Back Better” tax-and-spend package is the last thing the economy needs right now.

It’s not too late for the Senate to do the right thing and stop the bill in its tracks.