A Democratic Ally, Taiwan Merits Greater Trade With US, Europe 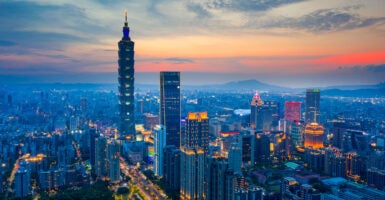 Taiwan provides an example of a pathway to greater development and prosperity based on high degrees of both political and economic freedom. Pictured: The Taipei 101 building, from 2004 to 2009 the world's tallest skyscraper, still dominates the skyline of the Taiwanese capital. (Photo: Kittikorn Nimitpara/ Moment/Getty Images)

“We came here with a very simple, clear message: You are not alone. Europe is standing with you.”

Those are the words offered to Taiwan from the head of the first-ever formal delegation of the European Parliament to the Asian island nation earlier this month.

The leader of the delegation further noted: “Not cooperating with Taiwan is a mistake, because where can you find better knowledge of the Chinese regime than here?”

Unambiguously, Taiwan has become more notable with its impressive record as a constructive member of the world community, despite efforts by mainland China to isolate it.

Taiwan clearly provides a positive example of a pathway to development and prosperity based on high degrees of both political and economic freedom.

From a broader policy perspective, Taiwan has indeed become a positive and more attractive economic partner for a number of countries in Europe.

In light of “China’s increasingly assertive brand of authoritarianism under its leader, Xi Jinping,” the European Parliament overwhelmingly called for closer and stronger ties with Taiwan by issuing a resolution describing Taiwan as a “partner and democratic ally in the Indo-Pacific, one that contributes to maintaining a rules-based order in the midst of an intensifying rivalry between the major geopolitical actors in the region.”

In its latest edition of “Freedom in the World,” an annual report that assesses political rights and civil liberties around the globe, Freedom House classifies Taiwan as a “free” nation. The report notes that “Taiwan’s vibrant and competitive democratic system has allowed three peaceful transfers of power between rival parties since 2000, and protections for civil liberties are generally robust.”

Taiwan’s free-market economic development is equally important and remarkable. Steady economic growth, enhanced by the pursuit of sound economic policies, has made the country one of the most prosperous in Asia. According to The Heritage Foundation’s 2021 Index of Economic Freedom, Taiwan’s is the sixth-freest economy in the world.

Clearly, Taiwan is a dynamic free market democracy whose resilient economy offers unique opportunities for greater trade and investment relationships with countries in Europe, particularly in the Central and Eastern European region.

It’s notable that Taiwan has also sought greater and more practical commercial relationships with Europe. Taipei sent a delegation of officials and business leaders to the Czech Republic, Lithuania, and Slovakia to explore greater investment cooperation.

In fact, Taipei’s effective response to the coronavirus pandemic has shown why European countries should be in the business of preserving and advancing freedom, civil society, and other democratic values in practical economic partnerships with like-minded and willing allies, such as Taiwan.

Petras Austrevicius, a Lithuanian member of the European Parliament who visited Taiwan as a member of the first-ever official delegation, pointed out:

The European Union and Taiwan are democracies with shared common values of freedom, democracy, human rights, and the rule of law.

Our trading relationship should reflect this. Our delegation visit to Taipei is a testament to that commitment.

Not only are we laying down the groundwork for a new trade deal, but we are also visiting to express our solidarity with Taiwan against China’s continued military belligerence, airspace violations, and disinformation campaigns against Taipei.

The EU should not seek Beijing’s permission to strike trade deals in the Indo-Pacific region.

Not only did China itself sign a trade agreement with Taiwan in 2010, but China has also signed agreements with [European Free Trade Association] nations, such as Iceland and Switzerland. …

If Europe is serious about strategic autonomy, it must not be afraid of defending its interests in the Indo-Pacific. A trade deal with Taiwan would send a message to Beijing about Europe’s commitment to being a global player.

Washington should take note of that, too. Clearly, installing a U.S.-Taiwan free trade agreement is one worth investing further in over the next decade as well.

Such a practical, more institutionalized economic partnership would reinforce other vital diplomatic links between the two longtime partners.

Indeed, now is the time for Washington and Brussels to pursue and capitalize on mutually beneficial trade and investment opportunities with Taiwan to a greater degree.