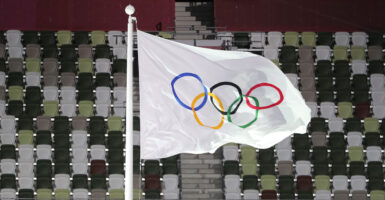 The International Olympic Committee says no athlete should be excluded from competition based on unverified, alleged, or perceived unfair competitive advantage due to biological sex. Pictured: The International Olympic Committee flag on Day 16 of the Tokyo 2020 Olympic Games at Olympic Stadium on Aug. 8, 2021, in Tokyo. (Photo: Jean Catuffe/Getty Images)

The committee stated that no athlete should be excluded from competition based on unverified, alleged, or perceived unfair competitive advantage due to biological sex in a Tuesday report. The report says athletes should compete in sports based on their self-determined gender identity and should not be subject to “targeted testing” to determine biological sex.

“Athletes should not be deemed to have an unfair or disproportionate competitive advantage due to their sex variations, physical appearance and/or transgender status,” the report said.

The International Olympic Committee went on to state that athletes should never be pressured to undergo “medically unnecessary treatments,” including hormone therapy, which some transgender people use to lower their testosterone to the level to that of a biological female.

The Sports Councils’ Equality Group report found that “transgender women are on average likely to retain physical advantage in terms of physique, stamina, and strength.”