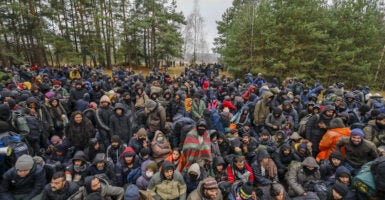 Thousands of people from the Middle East and Africa have been lured by false promises by Belarus autocratic dictator Aleksandr Lukashenka of entering the European Union via Poland. Pictured: Illegal immigrants attempt to enter Poland through the Belarusian-Polish checkpoint of Bruzgi-Kuznica on Nov. 18. (Photo: Sefa Karacan/Anadolu Agency/Getty Images)

Thousands of illegal immigrants are attempting to enter Poland from Belarus, with violent clashes with border guards breaking out on Tuesday.

To help understand what is happening at the Poland-Belarus border, The Daily Signal spoke with Alexis Mrachek, a research associate focusing on Russia and Eurasia at The Heritage Foundation.

The Daily Signal: We are receiving reports of thousands of migrants attempting to illegally enter Poland from Belarus, apparently for several months now. Who are these illegal immigrants and where are they coming from?

Alexis Mrachek: These illegal immigrants are mostly young men, women, and children coming from war-torn countries in the Middle East and Africa, who are lured by the false promise by Belarus that they can start a new life in the European Union. Some of the countries they hail from include Iraq, Yemen, Lebanon, Libya, and Syria.

The Daily Signal: One report stated that this border crisis was orchestrated by Aleksandr Lukashenka, Belarus’ autocratic dictator, to “cause trouble for the European Union.” How likely is it that this is a crisis manufactured by Lukashenka, and what would be his motive?

Mrachek: It is extremely likely that this is a crisis manufactured by Lukashenka himself. Since October 2020, the European Union has imposed sanctions on Belarus for conducting its presidential election in a fraudulent manner, for violently cracking down on peaceful protesters, for forcing the landing of a Ryanair flight, and for other offences. These sanctions have hurt Belarus’ economy severely, given that Belarus is one of the poorest nations in Europe.

As a result, Lukashenka desires to retaliate against the EU, and weaponizing immigration evidently is his chosen mode of action.

The Daily Signal: Lukashenka has a close—though not always amicable—partnership with Russian President Vladimir Putin. Is there any possibility that Russia is also behind this crisis?

Mrachek: There is no doubt that Russia is behind this crisis. Belarus and Russia have been close for decades—so close, in fact, that they signed a Union State agreement in the late ’90s. This agreement outlines a single currency, flag, and economy for the two nations.

Recently, Belarus and Russia deepened this integration by creating common policies on taxation, banking, and energy, to name a few, as well as a joint military doctrine. The two countries are not officially joined as one yet, but one should not rule out that possibility for the future.

Lukashenka and Putin also have a close relationship personally, so naturally Putin backs Lukashenka in his creation of this migrant crisis.

The Daily Signal: Violence erupted on the border Tuesday when migrants on the Belarus side threw rocks at Polish border guards, who responded by using water cannons and tear gas. Is it likely that tensions will escalate to increased violence?

Mrachek: It is somewhat likely that tensions will escalate to increased violence, but it is more likely that this was the highest escalation. Belarusian officials are now transporting migrants away from the Polish border and into warehouses for shelter.

But even though the number of migrants at the border is decreasing, tensions will remain high for some time.

The Daily Signal: Poland has been firm about securing its borders. How will Poland’s political leaders continue to respond to this border crisis? Is there the political will there to resist illegal immigrants? Or are there pro-asylum factions that want to receive them, and if so, how much political sway do they hold?

Mrachek: Given that Polish soldiers already have detained at least 100 migrants, it seems that Poland’s border security will remain firm in resisting the illegal immigrants. However, it is difficult to predict. On Nov. 17, Poland warned that the crisis could last months or even years.

Potentially, over time, Poland will receive some immigrants, but in the meantime, one can expect to see the country resisting them.

The Daily Signal: What U.S. interests are at stake in this crisis, and how should the Biden administration respond?

Mrachek: U.S. interests at stake in this crisis specifically pertain to the North Atlantic Treaty Organization. Poland, as well as Lithuania and Latvia (which are also experiencing a migration crisis caused by Belarus), are all NATO members. As part of the alliance, the United States has a duty to help protect its allies in the midst of a security crisis.

The Biden administration should respond by imposing additional sanctions on Belarus, as the EU has recently done, and by keeping in close contact with its NATO allies to see how the U.S. can further assist.