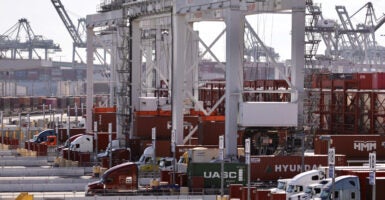 Port congestion like that seen here in Los Angeles on Oct. 29 has been a glaring part of the ongoing U.S. supply chain crisis. But the infrastructure bill signed into law this week by President Joe Biden will do little or nothing to address the problem. (Photo: Xinhua/ Getty Images)

President Joe Biden on Nov. 15 signed his infrastructure bill, a trillion-plus-dollar handout to left-wing special interests masquerading as a solution to the supply chain crisis he created.

The administration is touting the bill as a fix, but the truth is, the bill is at best irrelevant, and most likely will make the crisis worse, at an enormous cost to taxpayers.

The core of the supply chain crisis is a lack of capacity at ports and among truckers—and a historic shortage of workers, now at 10.4 million unfilled jobs nationwide.

Together, these shortages drive inflation, empty shelves of even basic goods, and shutter factories that can’t get the parts and inputs they need.

Rather than fixing this crisis, this bill instead uses it as an excuse to push a gigantic handout for special interests, radical left-wing activists, and unions. As a result, the money won’t be going where supply chains need it, but rather to irrelevant make-work projects that please activists and unions, such as subsidies for electric cars that have nothing to do with supply chains; to plowing hundreds of billions of dollars into tearing down and rebuilding Transportation Secretary Pete Buttigieg’s “racist” highways; to building trains to nowhere; and to bailing out failed urban transit.

This isn’t just about wasting money, however. Rather, these projects use up the resources and workers the private sector desperately requires to build capacity that’s actually needed.

For example, warehouses nationwide are at just 3.6% spare capacity—beyond their “capacity to even function properly”—yet they cannot expand because steel, concrete, and even construction workers are all in short supply.

Now, the federal government lumbers in with hundreds of billions of your tax dollars to outbid the remaining resources and workers for activist boondoggles, further starving the projects that are actually needed.

So, what’s in the infrastructure legislation?

The most important infrastructure problem at the moment is port automation, the lack of which makes California ports among the least efficient on earth—behind even those of Mombasa, Kenya, and Dar es Salaam, Tanzania—and which unions have fought tooth-and-nail for decades.

Even the useful bits of the bill, such as dredging, roads, and rail, go to projects that have little to do with actual supply chains. The $100 billion going to rail is almost all for subways, Amtrak handouts, restarting abandoned rural lines, or replacing at-grade train crossings. For roads, the money overwhelmingly goes to maintenance, not expansion, including tearing down and rebuilding those allegedly “racist” overpasses.

Some of these may be good housekeeping in the long run, but tearing up highways, bridges, and rails in the middle of a nationwide capacity crisis is like replacing one’s roof during a hurricane. It only makes matters worse.

Moreover, these hundreds of billions of dollars shouldn’t be decided by a remote federal government in the first place. State and local governments have a better idea of what’s needed, while the private sector actually has an incentive to build stuff people actually want.

What should the federal government be doing instead? Go where the problem is; namely, ports, truckers, and lack of workers.

That means telling port unions that automation is coming whether they like it or not, and replace them if they keep dragging their feet. It means standing down on activist-driven environmental and labor mandates that have knocked the vast majority of trucks out of California and threaten to take that nationwide.

Finally, it means stopping paying people to sit on the couch instead of taking one of the 10.4 million unfilled jobs—that is, no more benefits divorced from work, whether as stimulus checks, enhanced unemployment benefits, or “child allowance” payments as a shadow vote-buying universal basic income.

Unfortunately, all the real solutions would require Democrats to stand up to their special interests, the left-wing activists and unions. So, instead, they will likely continue this pattern of creating crises through incompetence, then using those crises as excuses to push more activist agendas—with American families left to struggle with rising prices, empty shelves, and shuttered factories.

As for this infrastructure bill, at best it will do nothing for the supply chain crisis, and most likely it will only deepen the crisis by hogging resources and disrupting struggling networks when we need them most.

Biden and Congress had an excellent opportunity to get out of the way, but they squandered it.