‘I Give Myself an A’: 4 Highlights of Mayorkas’ Senate Testimony on Border Crisis 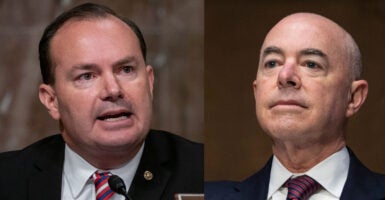 Your response and your failure to defend them then and now is nothing short of morale-crushing," Sen. Mike Lee, left, tells Homeland Security Secretary Alejandro Mayorkas during a hearing Tuesday before the Senate Judiciary Committee. (Photos: Ken Cedeno (left), Drew Angerer/Getty Images)

Homeland Security Secretary Alejandro Mayorkas gave himself an A grade Tuesday and told senators what they should do about illegal immigration, while many lawmakers had questions for him about border security as well as Afghan refugees.

Mayorkas testified before the Senate Judiciary Committee during a hearing where he also said the U.S. immigration system is “fundamentally broken—a fact that everyone agrees upon.”

“Congress must pass legislation to fix it,” he said.

From the homeland security secretary’s perspective, that means creating a pathway to legal status for illegal immigrants.

However, Republican lawmakers pressed Mayorkas about why the Biden administration had reversed some of the Trump administration’s border security measures, which they said were working.

Here are four highlights from Mayorkas’ testimony during the Senate oversight hearing.

The agents, on horseback, were holding standard long reins to control their mounts but did not carry whips, as some incorrectly claimed photos and video showed.

Sen. Mike Lee, R-Utah, asked why Mayorkas has been so silent since then.

“What about the issue of some of your Border Patrol agents recently being accused by some folks in the media of whipping illegal immigrants, when in fact they were not?” Lee asked. “Why on earth did you not defend them? Has no one in your entire department ever become aware of how someone uses split reins when riding a horse?”

Mayorkas said he had two points in response.

“No. 1, I put 100% into my work and I’m incredibly proud to do so,” the secretary said. “No. 2, I stand with the men and women of our department through and through. I will not prejudge facts before—.”

Lee cut him off to ask: “Did you defend them when they were being attacked for whipping people, which they were not?”

Mayorkas said he is not making a judgment.

“What I said quite clearly is that the independent investigation will determine the facts and those facts will drive the outcome,” he said. “Nothing less and nothing more.”

Your response and your failure to defend them then and now is nothing short of morale-crushing. If you want to maintain—or obtain—operational control of the border, which you do not now have, this is not a way to get there.

Referring to the larger numbers of illegal immigrants who have overwhelmed the southern border, Sen. Lindsey Graham, R-S.C., asked Mayorkas: “Do you believe that the Biden immigration policies are successful?”

Graham, ranking member of the Judiciary Committee, asked, “How would you grade yourself?”

Mayorkas: “I’m a tough grader on myself and I give myself an A for effort, investment in mission, and support of our workforce.”

Graham: “Do you think you’re doing a better job than the Trump administration?”

After some back and forth, Graham asked more directly: “Do you think we have more control over the border now than we did under the last administration?”

Mayorkas, hedging, replied: “I think we have more control that is consistent with our values as a nation.”

3. ‘Don’t Have That Data’ on Afghan Refugees

Sen. Josh Hawley, R-Mo., asked the homeland security secretary about interviewing refugees from Afghanistan before they enter the country.

Mayorkas said the Department of Homeland Security is “not conducting in-person, full refugee interviews of 100% of the individuals.”

Hawley asked: “What percentage are you conducting?”

When Mayorkas said he didn’t know the percentage of Afghan refugees, Hawley asked: “Of the more than 60,000 brought to the country, what number have received an in-person interview before they came to the country?”

The Missouri Republican was referring to interviews conducted by a trained official before a refugee is allowed into the United States.

Mayorkas said he didn’t know the answer to that question either.

“When you are speaking of a full refugee-like interview, I don’t have that data,” he said, adding, “We have data in the Department of Homeland Security. You are asking me what data I have at my fingertips.”

4. ‘Not Going to Construct a Border Wall’

“Can you explain to me why a wall is effective and necessary at the White House and the Biden beach house, but not at the southern border?”

Mayorkas answered that a wall wouldn’t work for the entire southern border.

“There are thousands of miles along the southern border,” he said, then talked about the “diversity and the terrain” there.

“Therefore, the key to border security is fundamentally advanced technology,” Mayorkas said. “That is the most effective means because we’re not going to construct a border wall on the ragged and jagged cliffs.”