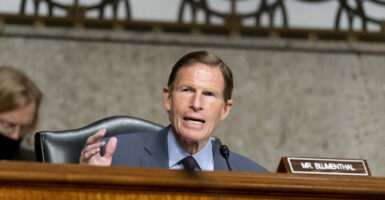 President Joe Biden’s nominee to fill the empty seat on the Federal Trade Commission has a history of opposing immigration authorities’ use of data to enforce the law.

Alvaro Bedoya, a Georgetown Law professor and privacy advocate who is scheduled to have his committee nomination hearing Wednesday, is a staunch proponent of limiting the ability of immigration agencies such as U.S. Immigration and Customs Enforcement to collect and use data to facilitate deportations of illegal immigrants. Bedoya has criticized private companies that provide immigration agencies with citizens’ data.

“It is time to call [Immigration and Customs Enforcement] what it is: An out-of-control domestic surveillance agency that peers into all our lives,” Bedoya tweeted in February, calling for stronger privacy laws to “rein in data brokers.”

While federal data privacy legislation has thus far failed to gain traction in Congress, Democrats have looked to the Federal Trade Commission to begin a privacy rule-making process under existing legislation.

If confirmed, Bedoya will oversee the enforcement of privacy laws as well as the creation of new data protections the Federal Trade Commission is reportedly considering. This position would offer Bedoya considerable latitude to regulate how data companies collect and share information.

In a column for Slate written in September 2020, Bedoya targeted data analytics company Palantir and its relationship with Immigration and Customs Enforcement as a reason for new legal protections on data privacy.

Palantir’s “leadership has decided that the cost of its work for [Immigration and Customs Enforcement] is de minimis, that in the eyes of its clients and the investing public it simply does not matter,” Bedoya wrote. “As a Latino and an immigrant, I worry that on this point they will be right.”

“Much of my work focuses on how surveillance affects immigrants and people of color,” Bedoya wrote. “Yet, even for me, it is hard to see the technology behind [Immigration and Customs Enforcement’s] brutality.”

Bedoya previously advocated for enlarging and empowering the Federal Trade Commission as a tool to combat data collection and consumer surveillance, pointing to the harms caused by “companies that track us to identify our weaknesses.”

Bedoya has also opposed the collaboration of state agencies and local law enforcement agencies with Immigration and Customs Enforcement, calling on such authorities to refuse to share data with the agency.

If confirmed, Bedoya would hand the Democrats a 3-2 majority in the Federal Trade Commission.

Bedoya declined to comment when reached by The Daily Caller News Foundation.