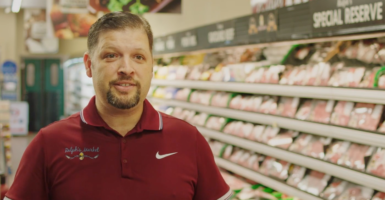 Brandon Trosclair, the second-generation owner of a Louisiana-based grocery chain, is the plaintiff at the heart of a lawsuit challenging President Joe Biden’s vaccine mandate. (Photo: The Pelican Institute for Public Policy)

President Joe Biden’s vaccine mandate is an “extreme burden on the American people,” says the grocery store owner at the center of a major anti-mandate lawsuit.

“I’m not an anti-vaxxer,” Brandon Trosclair, the second-generation owner of a Louisiana-based grocery store chain, said in an interview with The Daily Signal.

This is just an extreme burden on the American people and on American small-business owners as well.

Trosclair is the manager of more than a dozen stores that together employ almost 500 workers, according to a Nov. 4 lawsuit, making his employees subject to the Occupational Safety and Health Administration regulations.

Trosclair’s employees “will be adversely affected by the [Emergency Temporary Standard], because they already face worker shortages, and the [standard] would make it even harder to hire and keep employees,” says the lawsuit, filed on Trosclair’s behalf by the Liberty Justice Center and the Louisiana-based Pelican Institute for Public Policy. “The [standard] would diminish their ability to provide grocery options to the citizens of Louisiana.”

“Not only is this mandate a blatant overreach by the federal government, it also has a real impact on Americans who are looking for work and business owners who are struggling to keep their doors open,” Pelican Institute for Public Policy general counsel Sarah Harbison said in a statement. “The Biden administration’s mandate will put up a new barrier to work that hurts people’s ability to get a job and provide for their families.”

The government responded Nov. 8 by arguing that stopping the mandate would “cost dozens or even hundreds of lives per day.”

“Petitioners’ asserted injuries, by contrast, are speculative and remote, and do not outweigh the interest in protecting employees from a dangerous virus while this case proceeds,” the Biden administration lawyers wrote.

White House deputy press secretary Karine Jean-Pierre also told reporters Nov. 8 that the Biden administration was encouraging businesses not to wait, to “make sure that they’re getting their workplace vaccinated.”

“We say: Do not wait to take actions that will keep your workplace safe. It is important and critical to do, and waiting to get more people vaccinated will lead to more outbreaks and sickness,” Jean-Pierre said.

But on Friday evening, the U.S. Court of Appeals for the 5th Circuit upheld the previous court ruling, writing that Biden’s mandate is “staggeringly overbroad” and likely “violates the constitutional structure that safeguards our collective liberty.”

“We are thrilled that the 5th Circuit reaffirmed their initial stay on the Biden administration’s unconstitutional OSHA vaccine mandate,” Harbison told The Daily Signal.

“The court recognized that OSHA is no more suited to make health policy than the [Centers for Disease Control and Prevention] is authorized to make housing policy,” she added. “The Pelican Institute and Liberty Justice Center will continue to fight to make sure business owners like Brandon Trosclair are protected from potentially ruinous government overreach.”

Trosclair told The Daily Signal that he is ready to “take this fight all the way” to the Supreme Court if he has to.

“My father was in the grocery business as a young man, while he was in high school,” he explained. “He worked for Winn-Dixie, and he stayed with Winn-Dixie for quite a while, and came to work at Ralph’s Market in 1987 to run their meat department.”

“It was a one-store operation,” he continued. “And through the years, Mr. Ralph passed away, and my dad was fortunate enough to purchase that one operation in the year 2000.”

Two days after Trosclair turned 15, he said, he started working at the store and “fell in love with the business.” The family grew their businesses to three locations, which Trosclair said he purchased from his parents.

Since then, he said, he has added a fourth store and bought 12 Save A Lot stores across southern Louisiana and Mississippi.

“Since the lawsuit has been filed, an overwhelming amount of people have been pulling me to the side, shaking my hand,” Trosclair said.

“There has been nothing but support,” he said, describing “overwhelming support” from his staff, from the public, and from shoppers.

In a press release, the Liberty Justice Center said that it is also representing Texas-based employees of a second business that would also be affected by the mandate—CaptiveAire, a company that manufactures and services commercial ventilation systems.

“No matter how you feel about the COVID vaccine, every American should be outraged,” he added. “Apparently, the Biden administration’s COVID strategy is this: Circumvent Congress, ignore the Constitution, then threaten and bully millions of Americans to get vaccinated against their will. It’s an assault on the U.S. Constitution, which the president has sworn to uphold.”