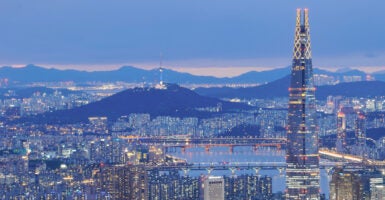 U.S. Trade Representative Katherine Tai embarks this week on her first trip to Asia in the post.

She will travel to Japan, South Korea, and India to hold high-level meetings with trade stakeholders in each country “to discuss the enduring U.S. commitment to the Indo-Pacific region and to strengthen trade and economic relationships with key allies and partners.”

Tai’s visit to the region comes at a critical juncture, particularly given the fact that many countries in the Indo-Pacific region have questioned America’s willingness and commitment  to pursue greater freedom to trade with the countries there.

The United States has been a leading Pacific nation. But for many allies and partners in the region, President Joe Biden’s declaration of “America is back” is just another empty diplomatic slogan that lacks concrete action.

The Indo-Pacific region, the most populous and economically dynamic part of the world, faces complicated challenges, such as the ongoing coronavirus pandemic and China’s increasing play in setting trade norms in a manner that could undermine a level playing field that has been in place.

Indeed, the overall geostrategic landscape in the region has been changing. With the risks to U.S. interests increasing on a number of key policy fronts that include economic and security dimensions, America’s leadership is being tested both by new challenges confronting the region and by uncertainty about America’s own policies concerning trade and investment.

The United States cannot decide for Asia whether to uphold and defend the rules-based order. Nevertheless, America can and must make the decision an easier one by demonstrating renewed leadership in the region, by choosing to remain actively engaged in the region as an indispensable partner through economic and commercial engagements.

A strong and focused partnership requires leadership that can go deeper than a set of talking points, to the tough and highly complicated issues facing the region, particularly intensified by China’s hegemonic bent to reshape the region.

Needless to say, America’s economic engagement with the region is essential, but will be hollow without Washington’s leadership in trade and investment. In the end, if the U.S. is to be a credible leading force in the Indo-Pacific, America has to prove itself a positive and dependable actor, not a reactive and unpredictable one.

The United States can and must step up its own game in the region considerably. However, without a discernible trade component, particularly America’s leadership in building a predictable trading environment, it would be an empty gesture.

The U.S. needs substance, and the substance that counts in a concrete and practical way is trade, among other things. America should strengthen enduring alliances and build on nascent ones by increasing measurable economic opportunities and collaboration—by removing barriers to more dynamic two-way trade.

In some cases, that might mean taking the first step, perhaps even unilaterally, to eliminate barriers to the freedom to trade and invest.

From a broader foreign policy perspective, freedom and democracy are not unchallenged in the region.

Value-driven partnerships require sustained reinforcement. The United States and its allies in the region have made the strategic choice to defend the principles of the free-market, rules-based order in the region over the past several decades. However, that choice must be reinforced with stronger commitment and concrete action now more than ever.

Tai’s visit to the three key countries in the Indo-Pacific region should be a practical and substantive step toward that.