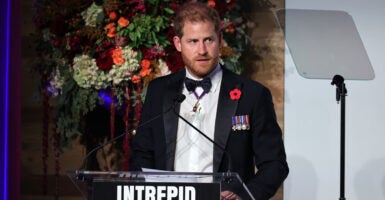 The Aspen Institute Commission on Information Disorder has called upon the Biden administration to have an “apolitical team” that counters the spread of online disinformation and conspiracy theories. Many of its commissioners, including Prince Harry, support left-leaning causes. Pictured: Prince Harry speaks at the Salute to Freedom Gala at New York City's Intrepid Sea, Air, & Space Museum on Nov. 10. (Photo: Theo Wargo/Getty Images)

A commission made up of mostly left-leaning figures recommended Monday that the White House counter the spread of disinformation and “dangerous conspiracy theories online.”

The Aspen Institute Commission on Information Disorder released a number of recommendations Monday, which included calling upon the Biden administration to have an “apolitical team” develop a national strategy to tackle the issue.

The group said that although the federal government has recognized the effects of false and misleading information “on public health, elections, businesses, technology, and continued campaigns on communities of color,” it has failed to create a strategy or put leadership on the problem.

In June, the White House said the federal government would “work to find ways to counter the polarization often fueled by disinformation, misinformation, and dangerous conspiracy theories online” in its effort to combat domestic terrorism.

In July, the U.S. surgeon general warned of the public health costs of “misinformation and disinformation” regarding the COVID-19 pandemic, and the White House has continued to emphasize similar messages.

“This lack of leadership, ownership, or strategy is hampering efforts, slowing response times, and duplicating efforts,” the report stated. “Thus, the Commission urges the White House to establish a dedicated team to define the disinformation problem and to clearly articulate desired objectives, leadership, responsibilities, authorities, and capabilities.”

The commission asked the White House to develop “clear policy statements on intent and objectives, defining roles and responsibilities across the Executive Branch … ” and identify “gaps in authorities and capabilities.”

“This is not intended as a call to establish new powers or authorities,” the commission noted. “Instead, it aims at providing a clear, focused, and strategic approach for the government’s responsibilities in addressing information disorder.”

The commission has been criticized for being highly partisan, and an earlier review by The Daily Caller News Foundation found that many of its commissioners are part of left-leaning causes.

Katie Couric, Prince Harry, and Kathryn Murdoch are some of the well-known names on the commission. Murdoch, for example, has a history of supporting left-leaning causes such as PACRONYM, a super PAC affiliated with ACRONYM, which has ties to the Democratic Party.

Murdoch’s spokesperson did not respond to The Daily Caller News Foundation’s requests for comment.

Other members of the commission include openly Republican members Chris Krebs, a former national security official, and former Rep. Will Hurd, R-Texas.